“Emily”: Recipes for a Poetic Theatre 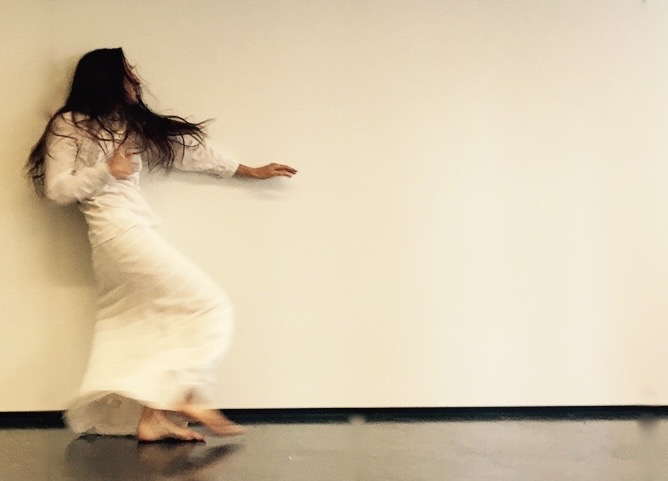 A woman in dressed in white appears in a white room.  She quickly runs to the wall, flailing her arms and legs against it, like a tornado.  The passion of her dance is enhanced by the live accompaniment of a cello.  The woman twists, turns, scratching the wall with her fingernails.

And then suddenly she stops, frozen in place, and the music ceases.  The woman in white asks, “Too…..dramatic?”  And then smiles.

This enigmatic opening moment from Emily is a microcosm of this new theater piece currently being developed in Oslo.  For the past three weeks, American theater artist and vocalist Mercedes Bahleda has been developing an original performance inspired by the life and poetry of Emily Dickinson.  On Friday, 9 September at 19.00, she will have a small invited showing of this work-in-progress at Eight Treasures Yoga.

Earlier this summer in collaboration with dramaturg and playwright Laura Lynn MacDonald (USA), Mercedes began immersing herself in the world of one of the first great American writers.  But her connection to Dickinson began years earlier.  “I started to memorize her poems when I was about 14,” she says, “and I feel as if I have been holding them within me for a long time, hoping to make them alive again.”

Wildly passionate yet intellectual; and painfully shy, yet outspoken.  Mercedes is drawn to the contradictions with Dickinson´s life as well as her poetry.  The image of this woman “sequestering herself away from society, never leaving her bedroom, never marrying, dressing only in white,” has haunted Mercedes for years.

“Years ago in New York, I began setting some of her poems to music”, she explains.  “And they´ve just stayed somewhere within me for a long time.  But recently, they started scratching the surface to come out.  Emily is an attempt to bring them out, see what´s there.”

Mercedes has performed with a number of extraordinary performing artists, from Paul Lazar and Annie-B Parson at Big Dance Theater, to choreographer Maureen Fleming.  Most recently, she performed in J. Stephen Brantley´s Distortion Taco in Ljubljana, directed by Eric Dean Scott, reprising a role she originated in New York.  But for developing Emily, Mercedes approached an old friend and colleague.

“I came to Oslo mainly to work with Brendan McCall,” an American theater artist she met in New York who lives in Oslo.  “He´s just a total inspiration to me.  I needed someone I knew wouldn´t be freaked out by trying to label anything we were going to do ahead of time.  I wanted to use music, acting, dance.  I wanted to use not only Emily´s poetry, but letters and recipes into the piece.  When I told him about my idea to make a piece like this, he just got a big grin on his face and said, Let´s do it.

“He is one of the most compassionate and open-minded artists I know,” she continues.

The feeling is mutual.  “Mercedes is a dream to work with,” says Brendan, who serves as the Producer for Grusomhetens Teater, Øystein Elle / Capto Musicae, and other independent performing arts groups in Norway.  “Not only does she have a rich imagination, but she has the skills to explore any possibilities.  We can do a scene as a dance, as a song, some mixture of both.  Mercedes is always game.”

Emily does not aim to be biographical in structure, however.  For Mercedes, she sees a lot of parallels between Dickinson and her own years-long Buddhist practice.  “Emily has something that the Buddhists would call renunciation and bodhicitta.  I think she somehow sees beyond this world, into a realm of the divine.”  She smiles before continuing: “I don´t think I have those qualities at all, but Emily does.”

“The piece is more about the interior architecture of an artist,” Brendan adds.  “driven more by the poetry than the historical facts of Emily´s life.  Her journey is more of a spiritual one.  In this sense, we could not have asked for a more perfect location to develop this piece than Eight Treasures Yoga.  Liyang and John gave us the time and space to experiment, try things.  That´s such an essential gift, for performing artists.”

During the final week of the process, Mercedes and Brendan will begin working with a live musician, the talented cellist Mira Beckstrøm Laurantzon.  “Mira is like the inner voice for Emily´s emotional heart,” Mercedes explains.  “I think some things cannot be expressed in words.  Collaborating with a local musician brings more depth and color to Emily.  Brendan and I are excited.”

The free showing of this work-in-progress is on Friday, 9 September 2016, at Eight Treasures Yoga.  For more information, please contact Brendan McCall at [email protected].

For more information about Mercedes, please visit her website: www.mercedes-bahleda.net.