Amazonas to be Staged in Oslo 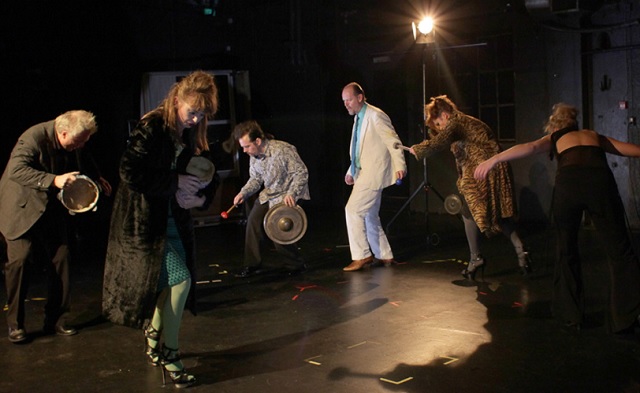 This past winter, director Lars Øyno won the prestigious Gammleng Award, for his contribution to contemporary Norwegian theatre; and most recently, Øyno´s direction of the world-premire Svanhild by Henrik Ibsen last year won the 2014 Oslo Prize for Best Performance.
Now Øyno comes up with another masterpiece, Amazonas. After a successful run in Bristol, UK, the play will be staged in Oslo this Thursday-Saturday (12-14 February 2015), at 19.30.

Director’s notes, Amazonas
Antonin Artaud wanted to create a theatre that could have a preventive effect on human created disasters. He had to seek out the indigenous Tarahumaran people in Mexico to find what he was looking for; an organic language based on ritual practices, a performative expression that completely opposed Western perceptions of the concept of performing arts. The purpose of this was healing, for himself and for the Western man. ‘In the darkness there is a sun’, he writes somewhere, ‘a black light’.

A similar vision manifested itself in Poland in the 60’s under the leadership of Jerzy Grotowski. Today we must note that the Western theatre is characterized by commercialization, whose main purpose is to increase material status and fame. Culture is reduced to passive idolatry, where life is avoided or kept at a distance. Artaud called upon a culture that could give us the possibility to obtain the forces of life itself, and in this context he saw theatre as a protest against the narrowing of the idea of culture in the West; art should contain a social anarchy.

Michal Walczak’s, Amazonas, aims to illuminate a conflict similar to this. A young person attending an audition assumes a serious situation where her enthusiasm will be taken seriously. Unfortunately it does not always turn out that way. In a theatre community you can quickly lose your idealism, and become used by the system to serve the passivity of the people. Theatre communities such as these can act as copies of business and capitalism; one confirms the system and receives one’s pay. All that which is known, what one sees and what is, gets attention. Nothing is given to that which does not exist, or is obscure and indistinct. Realizations of chaos and darkness might be the rescue. It is in facing the metaphysical that humans can understand their condition and can act with decency. The natural world we seek to preserve expects a different kind of presence from us, where we’re allowed to take a pause.

The Amazon is chaos, but based upon an absolute order. Man must listen to nature, then it is a friend. The rain forest is the lung, the respiratory organ, the anarchy that keep us alive on earth. A new direction for theatre must follow this thought. I feel that Krzysztof Komedas ‘Po Katastrofie’ fits into this frame. Catastrophe occurs in the moment when man raises himself up above the organic, pushes life aside and tears to pieces the most fragile of sensory and respiratory organs. When the Amazon has vanished the cataclysm is a fact. Afterwards only a massive grave remains – a death accompanied by the fanfares of trumpets – the Apocalypse.

To me Poland has always been a cultural nation. A number of innovative artists have inspired us in Western Europe through film, theater, music and visual art. Polish poster art and jazz music has been especially close to my heart. After the wall fell, the western expansion into Poland has certainly led to a more commercial situation. Whether one is about to lose traditions or not, I do not know, but the situation in Poland is not that different from that of young people in Norway; we are constantly being bombarded by the assaults of commercialism.

More info about the play

Amazonas from Grusomhetens Teater on Vimeo.