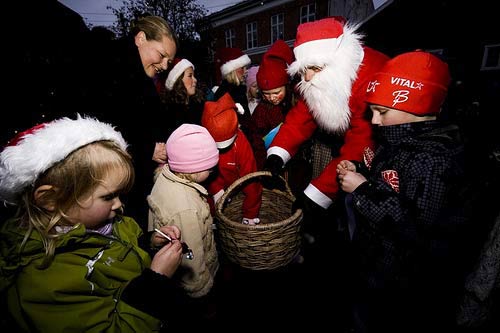 In the end of November, Oslo is decorated and prepared for Christmas, and the city is buzzing with people doing their Christmas shopping. Christmas trees are lit and streets decorated in the city centre during the first weekend of Advent. During these weeks you have plenty of opportunities to catch a Christmas concert or Christmas market.

During Advent it is common for companies, organisations and groups of friends to have pre-Christmas parties, in Norwegian called julebord. The julebord crowd fills up the city’s restaurants and clubs, making the weekend nightlife quite busy in this period.

Many families have their own traditions this evening, such as decorating the Christmas tree or making a gingerbread house, and many families eat risengrynsgrøt – a hot rice pudding served with sugar, cinnamon and butter. An almond is hidden in the pudding, and if the almond turns up in your portion,  you win a marzipan pig!

Of course, not everyone in Norway celebrates Christmas, but most people celebrate more or less according to these traditions. Many immigrants also celebrate Christmas, using elements of the traditional Norwegian Christmas. As this is a “stay-at-home evening”, most restaurants and pubs are closed on Christmas Eve, and the streets are empty and quiet.

The days between Christmas Eve and New Year’s Eve are typically spent going to brunches and dinners with family and friends. Many people go out in the evening, so there is more life in the city centre. From 27 December the shops are open, and people rush around exchanging presents that weren’t quite what they wanted.

The most popular Christmas Eve dinner is the ribbe (pork ribs or pork belly, bone in), but lutefisk (cod cured in lye), pinnekjøtt (dry-cured ribs of lamb), boiled cod, ham roast and turkey are also common dishes. Most fish restaurants and restaurants with Norwegian food have Christmas specialities on the menu in November and December. Many Norwegians like to have a a Christmas beer with the food – a malty beer that is available from November.

The risengrynsgrøt (hot rice pudding) is an old, traditional dish; this is what the barn gnome eats! In the countryside, many people put a bowl outside for the barn gnome. If there is pudding left, we can make it into riskrem – cold rice pudding mixed with whipped cream, a common Christmas dessert served with a red sauce.

A drink we often serve during Advent and Christmas is gløgg – a warm, spicy drink similar to German Glühwein. It can be made with red wine, but the non-alcoholic version is often preferred. You can taste it in most Christmas markets in Oslo. And if you would like a snack with the gløgg, try a pepperkake! A pepperkake is a Norwegian gingerbread cookie, and tons of them are sold, made and consumed during the Christmas season. Many parents bake them with their children, and the most patient ones also make a gingerbread house. The house is first used as a decoration, and then eaten at the end of the holidays.

Christmas is high season for snacks and candy. Enourmous amounts of marzipan is sold before Christmas. According to the marzipan manufacturer Nidar, Norway’s less than 5 million people manage to eat more than 40 million marzipan figures during this period.

You will also see bowls of chocolate and nuts in most homes. Traditional Christmas candy such as burnt almonds and glazed apples are rarely made at home, but you will find them in the major Christmas markets if you would like to taste.

Before Christmas we decorate the house with wreaths, angels, gnomes, hearts, stars, and maybe a nativity scene or a gingerbread house. More and more people also decorate their houses on the outside with lights and wreaths. Most families have a Christmas tree in the living room. It has a star at the top and is decorated with garlands, tinsel and ornaments. Take a trip to one of Oslo’s Christmas markets if you want to buy traditional Norwegian Christmas decorations.