A Warm Musical Treat From St. Petersburg to Norway 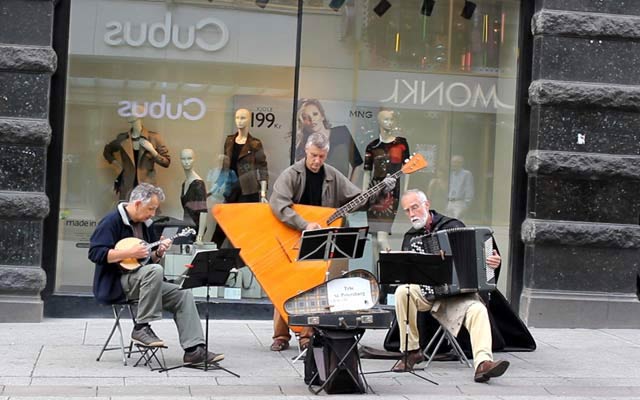 Alexei on
accordion, Sergey playing domra, and Vasiliy at contrabass; three musicians
surrounded by a large group of people on Karl Johans Gate, Oslo.  While these three musicians from St.
Petersburg play the joyful Russian and Norwegian folk melodies, the curious
crowd records this musical treat with their smart phones and cameras.

– We call
ourselves ‘Trio’ from St. Petersburg. Our first name was ‘Andreev’s Trio’ and we
have known each other for a long period of time, says Alexei.

The group
decided to come together about 10 years ago when Alexei and Vasiliy were
playing in an orchestra called ‘Andreev’s Ensemble’. Then, somehow they began
to play as a trio.

When we
asked for their story about performing in Norway, they tell us that their
adventure actually started in the Netherlands. Previously Alexei had already
been in Norway playing at some festivals while Sergey also sometimes played for
the Dutch orchestra so they started to go there as a trio and played music on
the streets.

One day
while they were playing in Belgium, two men came and invited them to
participate in an Organ festival which is held annually in Ålesund (Sande Organ
Festival). This is how they started to come to Norway almost every year.

– Actually
this is not our main business. We come together only for the summer.  For example, Sergey is a teacher at a music
school in Russia and I am also a teacher. Our repertoire is quite diverse. We
can play classical music, pop and obviously traditional Russian folk music. But
since there are only three of us we need to adapt the original music to fit our
instruments, adds Alexei.

Both Russian and Norwegian Music

The group
does not only play Russian compositions. They also play some classical parts
from Norwegian Grieg and Svendsen. For example, last year they had prepared a
special repertoire for the festival based on Grieg’s compositions.

Regarding
the Norwegian people’s appreciation of their music, they say that here in Norway
people really love music, and when they play outside most of them stop and
listen.

-Norwegians
are great listeners and we come here because they invite us every year. A
couple of years ago we were interviewed by the state television (NRK) but we
didn’t know that they came from Oslo. We thought that it was a regional
channel. Next week we went as usual to perform on the streets, and in fact, in
each place where we played we had kind of ‘sold out’ – so many people were
waiting for us to come and play for them. That was one of the most fabulous
times we had here, says Alexei.

They also
think people in Norway are very positive and they see children 10-13 years old
who try to play good music. Sometimes the members of the group meet these young
musicians on the streets when they play in their brass bands. They think this
is a great trend for improving and encouraging future musicians.

– Even in
small churches they use excellent organs. And if a person listens to good music
every Sunday, I think it surely affects their life positively somehow, says
Alexei.

Sergey, on
the other hand, notes that Norwegians like the style of music they play:

– Once,
while we were here, we heard that there were negotiations about whether or not
to let musicians perform outside because somehow it can irritate people who work
or live nearby. But we have not observed any problems from the public when we
have played. One of the reasons for this positive reaction is the musical
instruments we use, he said.

He suggests
that the sound of the music they make is not annoying or loud like drums or
other instruments may be; on the contrary their music is relaxing and pleasant
to people’s ears.

The most extraordinary situation they have had
in Norway

They say
that almost every day they have an interesting and remarkable experience. For
example, this summer, they were playing in Lillehammer. A man with a big beard
came and started speaking in Russian with them. He told them that his
grandfather’s cousin was playing first violin for nearly 20 years in the famous
Mariinsky Theatre in St. Petersburg.

– He was so
proud of his relative that he started to learn Russian and tried to understand
our culture. That was fascinating, says Alexei.

Also some years ago, while they were in
Trondheim at one of the festivals, suddenly the main organ broke down, so they
had to take to the stage to keep people entertained while that poor organist
tried to fix it. Finally he managed to do so and everything went very well
afterwards.

– Overall I
can say that anytime there is something extraordinary that happens it is a good,
funny and positive situation. We like to come to meet good Norwegian listeners
each year, adding an invitation to everybody to come to Russia, especially to
St. Petersburg.