Everything starts with the guitar 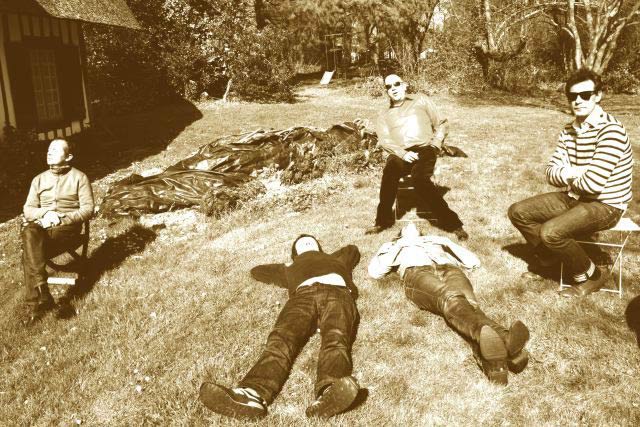 When you slide your finger along the map of Norway, along the west coast, till the municipalities Møre and Romsdal, you might happen to pass a tiny place, a small dot on the map called Nautvik. Maybe not even bigger than the fingernail of your index finger. Nautvik is a farming and fishing town and practically in the middle of nowhere.

It is situated at the waterside of the Dalsfjord and might as well be Troll and Hyldra territory. It is a spot of isolation. It is also the name of a French Rock band currently based in Paris.

The Nordic Page (TNP) met the six members of the group Antoine Caro , Samuel Laufer, Mathieu Ducrez , Nicolas Blanc, Patrice Barletta and Etienne Comar in France’s capital where they were just about to record their first album.

Blanc: It really was difficult. More like an up and down experience.

TNP: But a success?

Barletta: Well you have certain expectations when you start a serious project like that. And it is always difficult to live up to such expectations.“

TNP: So what could you do better next time?

The five men are relaxed, laid back on their chairs, the difficult part of the day is over. When recording the first songs, they performed it over and over again until it was shaped the way they want it to be. A professional atmosphere, a slight tendency towards perfection deriving from their ‘real lives’. All five of them did not just graduate, they all have passed their college age and have been engaged in overwhelming careers as successful producers, directors, professors or stockbrokers. Not surprisingly they also tackle their musical project with the same professionalism, the same ambition. It has only been five years since they have been practicing together, since they found this common path to music.

Blanc: We are amazed by the fact that it has lasted for such a long time. We all have a tight schedule in our daily life but when we plan to rehearse everyone is there.

Baerletta: Yes, we are serious about it. It is not a joke. A joke doesn’t las 5 years.

Just like a typical teenage Grunge band, they also started practicing in the basement, experimenting with melodies, chords and  rhythm.

Blanc: It took us this long to finally get into a real studio. There are still so many mistakes, so many improvements we have to keep in mind.

TNP: But you have been on stage before right?

Laufer: You know, in ‘normal life’ I am a philosophy professor. So for the last concert I invited a lot of my students. Thus, it was a rather young crowd.

Blanc: …who threw a lot of things on the stage which we do not want to talk about (general laughter)

TNP: So performing has already become a routine?

Blanc: Oh no, we are still always very nervous before a performance.

Barletta: It is like being in a tunnel. But if you hear people shouting – that is so exciting. And you begin think, “Hey, it can’t be that bad!“ (laughs)

TNP: Especially for the singer it must be very exciting and stressful at the same time. As a singer you are always the main entertainer for the crowd and the one the most exposed.

Comar: Exactly, it is (thinks for a moment). But I like to dance, that makes it easier. (smiles). No, but seriously I am not myself on the stage, it’s another version of me.

TNP: How important is democracy and compromise in a group?

Caro: The decisions are all taken together, We all have an equal standing. We haven’t actually quite figured out who the leader is.

TNP: And when you’re about to write a song – how does it work then? Is everyone’s opinion equally taken into account?

Barletta: Well, there really has to be strong opposition in order to not consider somebody’s idea. We try out almost everything. It always starts with a few chords. Everything begins with the guitar.

Blanc: Our own compositions are essential. We never do cover songs.

TNP: Because you could only lose?

Blanc: Yes, I am afraid so. Right from the beginning we decided to stick to our own works. That makes you so much more confident about your own music and on the stage. So when Comar sings, the melody kicks in. He also writes the lyrics.

TNP: What are the lyrics mostly about?

Blanc: The world crisis and economy. You can feel that there is a huge crisis behind everything right now. It’s a strange atmosphere that is also reflected in our music.

TNP: So why then are you singing in English?

Comar: Because French is even harder (everyone laughs).

Blanc: No seriously, it is very strange but we feel more comfortable when we sing in English. Maybe because French Rock is like English wine: really bad.

Caro: And there is more distance to the words if they’re not in your mother tongue. In French there seems to be so much to every word.

TNP: But isn’t there a obligatory amount of French music at French radio stations?

Blanc: Indeed there is. But we don’t care about the Radio.

Ducrez: Or the Radio doesn’t care about us (general laughter).

TNP: So the music you’re listening to is also in English?

Barletta: And the Rolling Stones, of course. We grew up with that kind of music.

Blanc: There are only a few French musicians we do like. as for example…well this is kind of hard! (laughing)

Blanc: We have to learn more about the Norwegian music scene, definitely. But I heard for its size and number of inhabitants Norway is supposed to have a really dynamic music scene.

TNP: So please solve the big mystery – why the Norwegian band name?

Blanc: Well, we thought about what name would reflect our dark, depressive kind of music. And suddenly it appeared right in front of us: Scandinavia! That is the right mood for us! And two of our band members have Norwegian ancestors.

Caro: Yes, I happened to know that tiny place called Nautvik. I used to spend my summer vacation there. The people living there were all very strange. Very Norwegian. I liked it. And my father’s job was to raise chicken in Norway. That’s why our first song was about killing chicken.

Blanc: Also, it was the time of the chicken and bird flu. Just another crisis we had to comment on, you know.

Comar: But it actually is not so important what we sing about. As long as we can identify with it. As long as it is something we ourselves have created. That is the most fascinating part of making music together.

Comar: Maybe. It’s just so completely different from everything we have done before. So we feel very young. And very lucky.