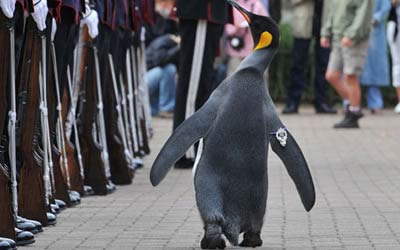 Nils Olav became an honorary member of the Norwegian Royal Guard in 1972, after a young lieutenant called Nils Egelien first visited the penguins at Edinburgh Zoo. He was named after the soldier and Norway's then king Olav V. Since that time he has been given the role of mascot of the Norwegian Guard and received various accolades for long service and good conduct including medals and a 4ft bronze statue.

The Norwegian Guardsmen like to visit Nils every few years while they are in the city performing at the Edinburgh Military Tattoo. They last visited in August 2008 when Nils was given the prestigious honour of a knighthood, a position so high it had to be approved the King of Norway, King Harald V.

The ceremony was lavish, and a crowd of several hundred joined 130 Guardsmen as Nils walked down to receive his knighthood. He was on his best behaviour the whole day, as always, and stood proudly as he was knighted.