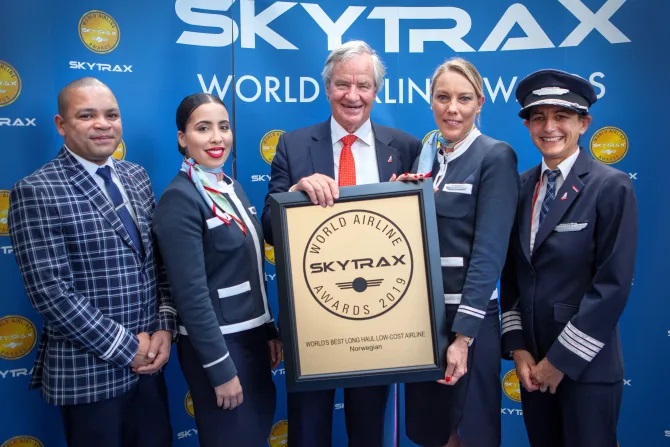 Norwegian has secured a major award at the 2019 Skytrax World Airline Awards, the leading international airline rating system as voted on by the travelling public, who evaluates airlines worldwide. For the fifth year in a row, passengers have voted Norwegian the “World’s Best Long-Haul Low-Cost Airline”. Norwegian was recognised for setting the standard in low-cost travel by providing outstanding service combined with a high-quality product while operating one of the youngest fleets in the industry.

Bjørn Kjos, Norwegian CEO, said: “It is a great honour to be recognised as the ‘World’s Best Low-Cost Long-Haul Airline’ for the fifth consecutive year at the Skytrax 2019 World Airline Awards. I personally would like to thank all our passengers who voted for us and my dedicated colleagues in the air and on the ground at Norwegian who continuously strive to deliver innovation and service throughout our customers’ journey. This award proves that the global travellers appreciate low fares, friendly service and new, more environmentally friendly aircraft.”

Edward Plaisted of Skytrax said: “This award is a fabulous recognition for all the Norwegian front-line staff who are responsible for serving customers, both in the airport and onboard environment. Norwegian has become a customer favourite with its long-haul low-cost concept and this award is a great customer recognition of their standards.”

These latest awards add to several other accolades that Norwegian has already received in 2019 including “Europe’s Leading Low-Cost Airline” at the World Travel Awards and “Best Low-Cost Carrier in Europe” at the Passenger Choice Awards.

Celebrating their 19th anniversary, the World Airline Awards are independent and impartial, introduced in 1999 to provide a customer satisfaction study that was truly global. Travellers across the world vote in the largest airline passenger satisfaction survey to decide the award winners. The awards are referred to by media around the world as “the Oscars of the aviation industry”.

Skytrax pay all costs of the Survey and Awards event, and airlines do not pay any entry or registration fee. The awards event and award presentations are supplied by Skytrax at no charge. Over 100 customer nationalities participated in the survey with 21.65 million eligible entries counted in the results.

Survey entries were screened to identify IP and user information, with duplicate, suspect or ineligible entries deleted. More than 300 airlines are featured.The online survey operated from September 2018 to May 2019, together with invitations sent to previous year respondents in the Skytrax survey database. The customer survey was operated in English, French, Spanish, Russian, Japanese and Chinese.