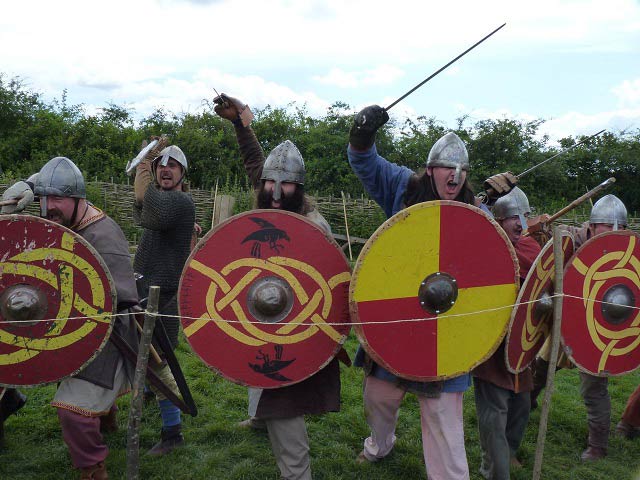 The Viking Ship Museum is a must-see for anyone interested in Viking history. The world’s two best-preserved wooden Viking ships, both dating from the ninth century, are displayed here. Smaller vessels, sledges, a cart with exceptional ornamentation, plus a range of tools, harnesses, textiles and household utensils complement the exhibition. Read more about the Viking Ship Museum.

Travel back in time and experience life in a Viking household in Borg, near Leknes, where remains of the largest known Viking Age longhouse were found. Hear Viking stories of power, glory and wealth. Join in a Viking feast, where you will be entertained and taken care of by the governor, his wife and their slaves. In summer you can also row a Viking ship, ride, and try your hand at throwing axes and shooting with bows and arrows. Read more aboutLofotr Viking Museum.

After the battle of Hafrsfjord in 872 AD, Harald Fairhair established Norway’s first throne at Avaldsnes. Follow in his footsteps and discover the rich history of the Vikings at Karmøy Kulturopplevelser. A Viking Festival also takes place there.

The St Olav Festival attracts tens of thousands of visitors every year. It features a medieval market, an art exhibition, concerts, theatre performances, seminars and more. Also popular is the St Olav Drama, which is performed each year at the end of July. It started in 1954 and is the longest running open-air play in Norway, and the purpose-built amphitheatre is also the largest open-air theatre in Scandinavia. Read more about the Stiklestad National Culture Centre and the Viking Settlement at Avaldsnes.

The Viking Camp in the tiny village of Gudvangen, located on the banks of the picturesque UNESCO-listed Nærøyfjord, celebrates its 10th anniversary in 2012. Get a taste of Viking life at the Viking Market, where you can watch as traditional handicrafts are produced, taste Viking food, take a peek into the Viking tents, or even get to row a Viking ship (well, a replica anyway).