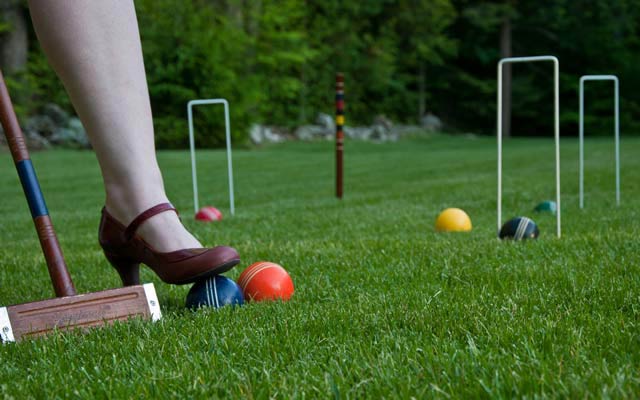 It is believed that croquet arrived in Norway in the
1860’s. In 1867 Falck Ytter published a book about games, with croquet among
them. The same year Christiania Boldlag (Christiania is the old name for Oslo,
boldlag means “ballteam,” written the old way) started playing
croquet – which indicates that at least one sport club played the game. Both
men and women played at Akershus Fortress. Croquet soon became popular in the
towns, and was taken up by civil servants living in the countryside, and later
by wealthy farmers. Around 1880, just as it did in England, tennis eclipsed
much of the interest in croquet, especially in the cities. But In the
countryside the old-style game survived through the 1920’s.

Around 1970, there was a resurgence of interest in
croquet in Norway, where groups were often seen playing in the public parks. At
the same time croquet was still being played in private gardens as a family
game, as it had been for generations.

No one can say with certainty who introduced croquet
to Norway. Falck Ytter with his book in 1867 certainly had a great impact. It
is believed that seamen might have brought the game back home from England, and
civil servants might have learned it abroad as well.

Today, some Norwegians still play croquet with very
short mallets, among them some players at Lillestrøm. The short mallets may
have been introduced from Denmark, where tens of thousands play the game with
short mallets even today. (Danish croquet is a popular traditional form of the
game administered by the national sporting body of Denmark and not affiliated
with international croquet bodies.)

At Jæren (quite close to Denmark) and in some places
on the southern coast, croquet is played with short mallets. Old pictures from
the Jaeren area show long mallets in use, and females playing. Short mallets seem
to be a feature of male-only play historically, perhaps because of the body
postures required – not a graceful position for a female. However, many believe
the short-mallet games were not for croquet at all, but for a scaled-down
wicket game called roque, played on sand, not grass, with boards around the
court – just as they have in the version of croquet played at Jæren. (Roque was
played in the 1904 Olympics in St. Louis, Missouri.)

Jeløy Croquet Club (JCC) and Croquet-selskabet (The
Croquet Society), introduced Association Croquet into Norway in 1974. The first
game there was played on June 8, 1974. Golf Croquet was introduced the next
year, after we first witnessed this easy-to-learn game during a visit to the
British Isles and Ryde Croquet Club on the Isle of Wight. We also brought back
from England the translated Laws of Association Croquet as well as Golf
Croquet.

In 1977 competitions for both Association Croquet and
Golf Croquet were introduced. These competitions lasted the whole season, like
the Croquet-statistics (in Norwegian Standard) which had started 1970 and which
is the longest running croquet competition in Norway. But it was difficult
recruit players from other clubs at the time, because no one else played
Association Croquet or Golf Croquet in Norway. So nationally, the interest
declined. 1981 was the last attempt from Jeløy to stage games described as the
’British’ form of croquet, in their ’After Eight’ tournament. Golf Croquet was
played for the last time, not to be seen again on Norwegian lawns for the next
23 years.

Then, in July 2004, Jeløy Croquet Club celebrated
their 30 Anniversary with another Jubilee Tournament, and in the Opening
Ceremony the creation of The Croquet Association of Norway was announced! This
was made possible by the combined forces of Jeløy and the Brevik Croquet Team
as founding members, with the membership now grown to eleven clubs. Since then,
both Association Croquet and Golf Croquet have been reintroduced to the
Norwegian croquet scene.

It is true that some other groups had independently
started playing Association Croquet, among them Nord Jarlsberg County &
Croquet Club, Christiania Croquet Selskab and Oslo Croquet Club, but without
any national organized presence, they had little or no impact on the
development of the sport in Norway.

Because of Jeløy Grand Tournament, the first
international tournament in Norway, staged by The Croquet Society and JCC in
May 2005, the first National Team was organized by The Croquet Association of
Norway. The tournament developed into the first Nordic Championships. In April
the same year the National Team learned how to play Association and Golf
Croquet. They beat the Finns, who also had just learned the games, but were
less successful against the Swedes. The Norwegian National Team, however,
achieved a measure of revenge in the autumn when they beat the Swedes in Golf
Croquet during a battle between the two brother nations 100 years after the union
between Norway and Sweden was dissolved.

Much of the croquet played today is in public parks,
on long grass. In late 2005 the foundation of an international-type lawn was
laid by Hjulmakerveien Crocket Club in Fredrikstad, 2/3 size. At Jæren four or
five outdoor lawns are also said to exist. Earlier, in the 1950’s, five lawns
had been built at Lillestrøm, close to the river, but flooding took them away.

The Holmsbu Golf Course at Hurum has long played on a
single outdoor court, through the influence of a Norwegian married to an
English woman who only visited Norway on holiday. But now they have extended
the area gradually to accommodate five courts. Strawberries used to grow where
now the croquet balls roll. Hurum is now said to be the biggest croquet center
on the European continent.

The first National Championships were played in 2005,
for all three forms of the game: Norwegian Standard, Association Croquet and
Golf Croquet. The Croquet Society produced the Norway Open in August 2007, the
second international tournament in Norway, held at Holmsbu. The Norway Open was
played again, in May of 2008. The winner of the event is also the Nordic
Champion, as the Nordic Open is played at the same time.

The prospects of croquet in Norway in its various
forms seems good. The season is short, but hardrocked vikings play even in snow
and ice – and where else can you enjoy a game of croquet under the midnight
sun?

A FEW
FACTS ON NORWEGIAN CROQUET

·
Croquet-statistikken (The Croquet Statistics) is the
longest running croquet-competition in Norway. It has been played for every
year since 1970 by the Jeløy Croquet Club.

·
The Tribune, Norway’s croquet periodical, has
published continuously since from 1975. It is produced by The Croquet Society
and Jeløy Croquet Club.

·
The Nordic Croquet Shop has the widest selection of
equipment next to The English Association.

·
It has been reported that Thor Heyerdahl’s Kon-Tiki
expedition in 1947 was delayed by a game of croquet in the garden of Captain
Gulbrandsen in New York.

·
Norway’s first queen in modern time, Queen Maud,
daughter of Victoria of England, played croquet as a princess of Britain.

·
“Norwegian Standard Croquet,” resembling the
nine-wicket American game but with a double-wicket cross in the center, was the
form of the game most played at Norwegian Clubs until 1974, when modern
English-style “Association Croquet” was first introduced to the
country. The traditional form of the game still dominates in my Norwegian
Clubs. Golf Croquet is much more popular than Association Croquet.

·
Croquet players in Jæren are permitted to go down on
their knees when they strike the balls.

During a visit of The President of the Croquet
Association of Norway to Strandpromenaden Krokketklubb, Lillestrøm, The Croquet
Society found out that the players at the court in Lillestrøm played a version
of croquet which must be a missing link!!! A missing link between Association
Croquet and 9 wicket croquet.

The court is very much the same as in Croquet,
Norwegian Standard or American 9 wicket, but the surface is hard sand, not
grass. The equipment is short mallets held by only one hand, and small balls.

The Croquet Society thinks that 1850 is too early.
Croquet is considered entering into Norway around 1860. In 1850 it became known
in England, but not among the workers, though it quickly became very popular.
Then it seems that it has always been played with long mallets in Britain.
However a club in Glasgow has been found that played it on gravel with short
mallets using one hand only. On the other hand a picture from the last half of
1800 from Bjørkelangen, in the vicinity of Lillestrøm, shows that they used
long mallets too.

The Croquet Society believes the one-hand-croquet to
have originated in Denmark. They have got 6000 players still playing it. From
Denmark it spread up the south-west coast of Norway with seamen.

But watching the game at Lillestrøm one has to confess
that it resembled very much Association Croquet in tactics. It could be the
missing link or Olde English still alive and kicking, being played in the good
old Kingdom of Norway!!!

Tore Gulbrandsen lives in both Moss and Oslo, Norway.
He is the founder of The Croquet Society (1970), co-founder of Jeloey Croquet
Club (1974), Oslo Croquet Venner (Friends) (2005), introduced Association
Croquet into Norway in 1974 and Golf Croquet in 1975, encouraged the creation
in 1970 of the long-running annual croquet event (Croquet-statistikken, or The
Croquet Statistics) and the Norway Open (2007), an annual golf croquet
tournament. Tore was the first president of The Croquet Association of Norway
(2004-2008), and is now leader of The National Team. Divorced, with one
daughter, he loves travel and has contributed to two books about travel. He
also enjoys designing logos and postal stamp camcellations, some with croquet
themes.