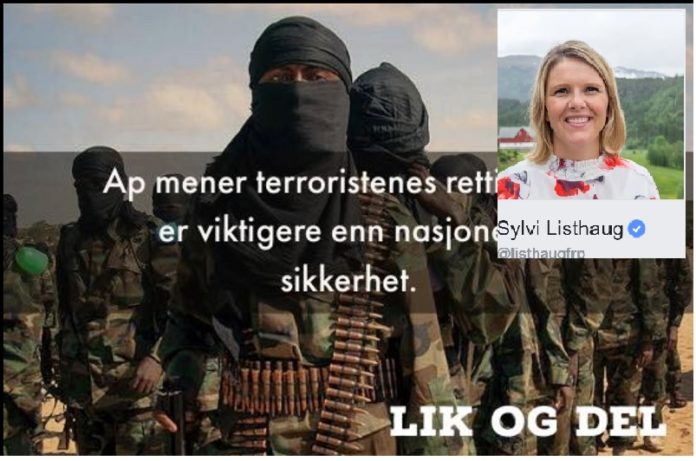 The accusation by Listhaug came after a majority in the Norwegian Parliament voted down a proposal from Listhaug’s party, Frp. The proposal suggests supreme court to be able to deprive Norwegian citizenship without court decision in some conditions.

Yet, majority of the parliament including some government members has a disagreement on how the respective arrangements safeguard the security of the nation, and about principals sides of the case, which has less to do with the “rights of terrorists”, according to the conservative magazine Minerva.

After the voting, Listhaug posted on Facebook a picture showing armed men with the following note:

“Ap believes the rights of terrorists Are more important than the nation’s security”.

AP leader Jonas Gahr Støre said to NRK that it is a gross accusation and low level debate from the country’s justice minister.

He also claimed the timing of the post is noteworthy:

– The post was released on the same day as the Utøya film came to Norwegian cinemas. We have been exposed to terror and we fight terror (referring to 22 July right wing terror attacks by Breivik). Listhaug then comes with a statement that is grossly unfair, I think it is disappointing and unworthy of a justice minister in Norway, said Støre to NRK.

Prime Minister Erna Solberg avoided to criticize Listhaug’s post but called both parties to keep up the level of debate.

Minister of Knowledge and Integration Jan Tore Sanner said to VG everyone must think about which pictures, rhetoric and words they use in a discussion of such serious issues. And then he accused Jonas Gahr Støre of pulling the July 22 card.

His statement about “22 July card” created strong reactions. Several survivors from the 22 July terror attacks on Utøya reacted to Sanner on Twitter.

Helén Ingrid Andreassen, one of the survivors wrote on Twitter:

Pulling the 22st of July card? I was there. I will have injury and trauma for the rest of my life. I have lost my friends. It’s not a fucking card. It actually happened, no matter how much the government seems to care about it !!