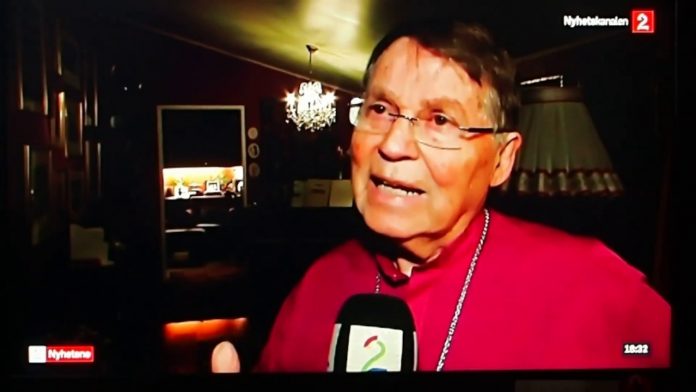 Retired Oslo Bishop Gunnar Stålsett (84) could face 45 days in jail because he gave work to an unreturnable asylum seeker Lula Tekle (55) for several years. Activists and lawyers react to the case.

Stålsett tells Dagbladet that his humanity and Christian faith preceded Norwegian law when he chose to give Tekle work for 14 years. Stålsett further states that he will take the responsibility during the court hearing in Oslo.

The bishop is accused of having broken the Immigration Act §108, third paragraph, which reads:

“With a fine or imprisonment up to two years: a) intentionally or grossly negligent use of a foreigner’s labor when the foreign national does not have the necessary permission under the law.”

Whether the 84-year-old can actually end up in jail is uncertain but several profiled lawyers and activists have raised their voices against the case which was brought by Oslo police.

-I hope that Stålsett sets will go to prison. It becomes much greater symbolic value and shows this madness in a much better way, says Meling to Dagbladet.

Police lawyer Andreas Meeg-Bentzen, who has brought the case to the Oslo police, informs Dagbladet that the case is not yet ready. He has also been criticized by several lawyers.

Former Minister of Justice, Anne Holt is aware that the police are doing their job but disagrees that he made a wrong thing. She notes Stålsett broke the law and it is regarded as civil disobedience.

-Such disobedience is believed to be unjust or wrong. Yet In my opinion, Stålsett did a noble act, says she.

Holt asks people not to complain about the authorities doing their job, but rather asks people to make pressure on parliamentary representatives to contribute to the change of law.