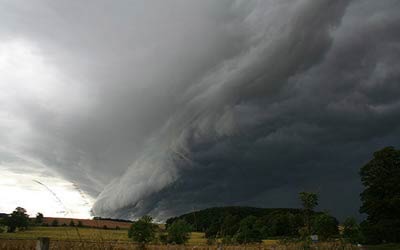 The extreme storm system slammed into Norway’s west coast at the weekend and now travels across Norway.

Forecasters predicted the storm would lead to strong wind and make landfall in the southern Norway.

The worst of it is after six o’clock in the evening and into the night, said meteorologist on duty Børje Johansson at the Norwegian Meteorological Institute in Oslo. The wave height can be from three to five meters, according to Aftenposten.

– Worst of it will be felt on the west coast – there will be probably storm, says Johansson.

The water flow is expected to increase rapidly in many smaller rivers and streams. Heavy showers can cause local flooding. Densely populated areas are particularly vulnerable. There is great uncertainty about both the precipitation level, according to meteorological reports.

Tropical Storm Bertha was officially declared to be a tropical storm, on August 1. Bertha made its first landfall on the north coast of Martinique, and then it made more landfalls in Puerto Rico and Dominican Republic on the following day, and it later impacted the Bahamas on August 3. The remnants of Hurricane Bertha is currently crossing the UK bringing widespread heavy rain and gusts of up to 60 mph expected.