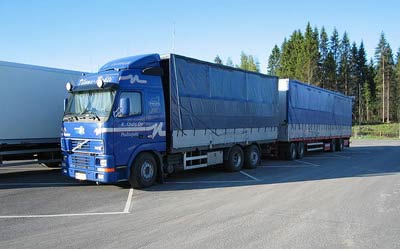 His lorry did not have the right winter tread tyres and was stuck on an icy road.

It was being towed off the mountain pass north of Oslo by a large rescue tow truck when the accident occurred.

The incident was filmed by a passenger in a car travelling behind the two vehicles.

The lorry driver was struggling to steer his vehicle as it slid on ice and sideswiped a guard rail.

Moments later, both vehicles crashed through the fence and plunged down the cliff.

The driver of the tow truck managed to jump clear after he sensed the towed lorry was sliding out of control.

The vehicles rolled multiple times in the accident near Leirfjord, around 560 miles from the capital.

Remarkably, the driver of the stranded truck is in a stable condition in hospital – he suffered several bone fractures in the accident.