Rights, Wrongs, and the War on Drugs 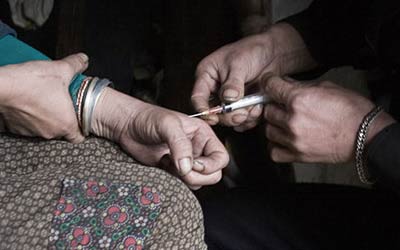 One
of the common
arguments for ending the so-called “war on drugs” is that the enforcement
of drug prohibition policies has “led to widespread and serious human rights
violations” around the world. Dr. Robert DuPont, former White House drug chief,
explains why he thinks the aim of protecting human rights actually justifies
prohibition policies.

What
is the relationship between international drug policy and human rights?

The issue, at least the way I think about it, is, “Is the
right to use a drug in contravention of the law a protected human right?”

The narrower question is, “What is the United Nations’ human-rights
position with respect to drug use?” It’s my understanding that the only UN
convention that mentions drug use is the Convention on the Rights of
the Child, which very clearly identifies the right of the child to grow up
drug free, and establishes the responsibility of government to protect the
child from drug use and drug trafficking. That, to me, is the human right to be
protected, and it’s not a human right to protect adult drug users from laws.

In
1972, the National
Commission on Marihuana and Drug Abuse recommended that simple possession
of marijuana be decriminalized because the existing laws conflicted with the
constitution – the implied right to privacy. How do you reconcile this?

The commission did not come out in favor of legalization. There
was an argument about reducing the penalty, and, for practical purposes, that’s
occurred in the United States. The number of people who go to jail for
marijuana possession is essentially zero. The arrests are still widespread
because it’s used so much, but the consequences tend to be … certainly not
imprisonment.

I don’t think there’s a privacy right to use any drug,
including marijuana.

Alcohol
is widely used as an acceptable part of social activities. Why should it be
treated differently than, say, marijuana?

Because of the history of the substances. If the roles were
reversed, I think it would probably be difficult to approve alcohol – or tobacco,
for that matter – today.

The way I try to be consistent is to have a policy that
discourages the use of all these
drugs, including, particularly, tobacco. I don’t think anybody, including me,
is talking about a legal prohibition of alcohol or tobacco, but that’s not a
reason to make the use of other drugs legal.

It
seems there’s a powerful international movement that opposes the so-called “war
on drugs” and the continuing prohibition of certain drugs, including marijuana.
Why do you think that is?

We’re in a global epidemic of drug use that started in the
1960s. It’s never happened before in the history of the world. It’s clearly a
global epidemic, and it’s an evolving epidemic. The most dramatic evolution taking
place in the United States right now is the abuse of prescription drugs,
particularly opiates. This is the fastest-growing illegal drug problem in the
country, and the one that creates the most problems.

I’ve never heard anybody propose to solve the problem by
legalizing the recreational use of oxycodone or hydrocodone. The only reason
people talk about legalization is because they think the drug use itself is
essentially benign – that’s the argument for marijuana – and people know that oxycodone
use outside of medical practices is hardly benign. You’ve got more overdoses in
the country now than traffic fatalities.

It’s hard to imagine dealing with the problem of oxycodone
without it staying illegal. I think the legal line is useful for prevention and
treatment.

Some
countries, like Portugal, have eliminated most of the criminal penalties for
simple possession as a way to try to reduce or discourage the use of hard
drugs. And that, according to their evidence, seems
to be working. What’s wrong with that approach?

Portugal refers drug users to treatment to encourage them to
stop using, or to help them stop using. So, it’s not as though they just turn a
blind eye to it.

I think it’s completely wrong to say that the world’s moving
toward legalization of drugs. I don’t think it’s moving that way at all.

I think the diversity of approaches to the drug problem is
actually very appealing, and that we’ll learn from experiences around the
globe. I would be interested in somebody somewhere trying to legalize the drugs
and seeing how they do. I just hope that nobody I know lives there when they do
that, because I think the consequences would be bad.

I’m a medical doctor, a physician, and for me the issue has
to do with understanding the brain. Drugs produce a powerful brain reward, and
if they’re widely available and their use is sanctioned, there will be very
grim consequences for public health and safety.

From my point of view, the legalization movement only exists
in the context of prohibition. Once it’s actually in operation anywhere and
people have access, and commercially develop access, to the abused drugs, I
think the interest in legalization will diminish rapidly.

My view is that the best drug policy is the one that reduces
the use to the lowest level. I would say, figure out what that is, and how to do
that within the context of your society and its values.

The goal is to have drug-free citizens. Drug-using citizens are
an economic drag on society, and drug addiction is modern chemical slavery. Promoting
drug-free lifestyles is a matter of emancipation.

Robert DuPont is
the former U.S. White House drug chief, the founding director of the National
Institute on Drug Abuse, and the founding president of the Institute for
Behavior and Health, Inc.