Norway, Colombia and the leadership of the FARC Guerrilla launched this week a whole new program to help former guerrilla soldiers return to society.

A main task for them will be to take care of Colombia’s huge rainforest. Norwegian Climate and Environment Minister Vidar Helgesen met Colombian President Juan Manuel Santos in Bogota and praised the Peace Prize winner for his vision of combining peace work with environmental work.

-This program is a unique collaboration between Colombian authorities and FARC. It is at a critical point in the peace process. And it comes at a time when Colombian forests are under more pressure than long, “said Helgesen after meeting with the president.

In a heavily armed military helicopter Helgesen and two Colombian ministers flew into the rainforest of Caqueta province, a couple of hours flight from the capital Bogota. There prominent FARC leaders and hundreds of ex-soldiers are gathered to lay down their weapons after more than 50 years of bloody civil war. Around 500 representatives from local communities and former FARC soldiers are expected to join what is characterized as one of the first reintegration programs after the parties signed the peace agreement last year.

Challenges for Forest after FARC

Caqueta is one of Colombia’s richest forests, with over 65,000 square kilometers of rainforest – an area larger than Hedmark and Oppland counties combined. The county has several national parks and has a huge rich diversity of plants, animals and insects. But the forest is exposed to severe pressure. A pressure that has increased after the peace agreement was signed in October. Criminal groups, land speculators and various actors try to exploit the power vacuum FARC has left behind after they lay down the weapons. 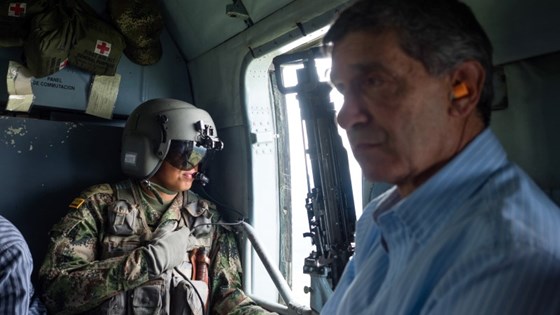 Heavily armed military helicopter would transport Colombian post-conflict minister Pardo and Vidar Helgesen into the rainforest to meet demobilized FARC soldiers. But the helicopter was forced to make a return due to heavy rain. Photo: Snorre Tønset, Ministry of Climate and Environment

These days, the FARC guerrillas are about to lay down the weapons, and thousands of ex-military soldiers are trying to switch to civilian life and will need a new livelihood. But the disarmament has been severely delayed, partly because many of the former guerrilla soldiers have nothing else to do. Therefore, the Norwegian-supported reintegration program is very important.
-If they are not given hope of a better future, there is an imminent danger that demobilized soldiers return to illegal activities or lose confidence in the peace process,” says Vidar Helgesen.

Crucial to the climate

Worldwide it is estimated that reduced deforestation and restoration of forests can contribute up to one third of the climate solution the world needs to achieve the goals of the Paris Agreement.

The rainforest in Caqueta covers an area similar to Oppland and Hedmark in total. Keeping the most of it is very important to avoid climate change. Photo: Snorre Tønset, Ministry of Climate and Environment

Colombia is one of Norway’s main co-operative countries for rain forest conservation. Norway has committed itself to paying up to 1.8 billion dollars over the next few years to Colombia if the country is able to reduce deforestation.