A New Era of Cooperation in the Barents Region

The first Kirkenes Declaration was signed in 1993 and opened the way for cooperation across borders that had previously been closed. The new declaration points out that local initiatives have been essential to the success of the Barents cooperation, and that it is still the peoples of the region who play the key role in the cooperation.

The declaration sets out that efforts to make border crossings more efficient for both goods and persons will be continued, and that the goal is visa-free travel. This will continue to promote confidence-building between the countries at local, regional and national levels. The treaty on maritime delimitation with Russia is an example of the results that can be achieved by building confidence in this way.

The prime ministers and high-level representatives also express concern over the impact of climate change that is already visible in the region, and they refer to the Barents Euro-Artic Council’s Climate Change Action Plan that is currently being drawn up.

The declaration advocates the further development of cooperation in the fields of education and research. It also emphasises the crucial role played by civil society actors, particularly NGOs, youth organisations and the media, in a range of areas. 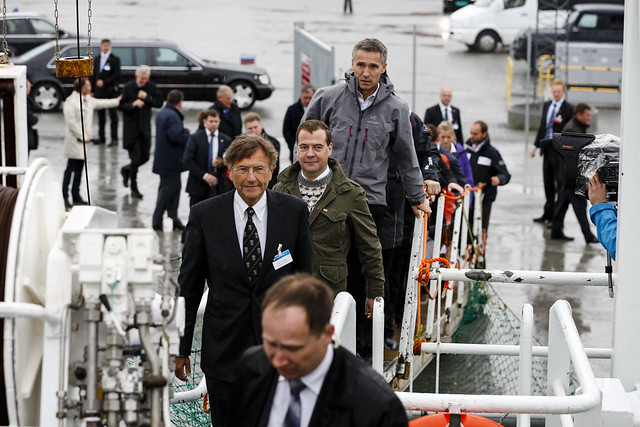 Strengthened Cooperation between Russia and Norway

“The twenty years of Barents cooperation have served to build trust across the borders in the region. This trust and the extensive contact between our countries have strengthened cooperation between Norway and Russia, not least in the north,” said Prime Minister Jens Stoltenberg during the celebration of the 20th anniversary of the Barents cooperation.

The Barents cooperation is based on the 1993 Kirkenes Declaration. During the anniversary summit in Kirkenes, a new declaration was adopted. The new declaration reaffirms the principles from 1993, and particularly emphasises the region’s resource potential. In the declaration, the countries undertake to facilitate increased business cooperation and trade.

“The trust that has been built between the countries in the region has developed into unique cross-border cooperation that now furthers security, prosperity and growth in the region,” Mr Stoltenberg said following the Barents summit in Kirkenes.

Mr Stoltenberg stressed that the Barents region has an abundance of natural resources, and that cooperation in the time ahead will focus on the sustainable exploitation of these resources. Development of infrastructure is crucial, and a separate transport plan for the Barents region will help to promote this.

In connection with the summit and anniversary celebrations, Prime Minister Stoltenberg met his Russian counterpart Prime Minister Medvedev for a bilateral meeting.

“The meeting with Prime Minister Medvedev in Kirkenes provided a good opportunity to review the status of our bilateral cooperation and how it has developed over the 20 years that have passed since the start of the Barents cooperation. Today we agreed to expand our cooperation, particularly in the area of security and emergency preparedness. We will strengthen our cooperation on notification of nuclear incidents, and just two days ago the new ship reporting system, Barents SRS , entered into operation,” Mr Stoltenberg said.

Prime Minister Stoltenberg and Prime Minister Medvedev agreed to continue efforts to facilitate cross-border contact, and both Norway and Russia are interested in increasing trade and business sector cooperation in general. 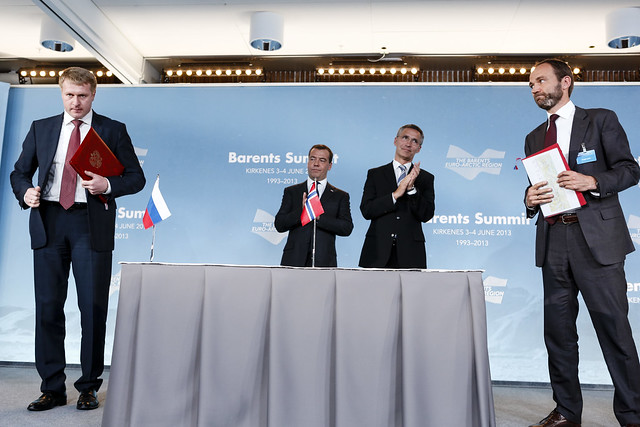 “During our meeting I also expressed concern over the increased pressure on civil society actors in Russia. We see that this is also having a negative effect on cooperation between Norwegian and Russian NGOs. This cooperation has been highly significant for building trust between our countries, and has produced good and concrete results,” Mr Stoltenberg said.

Mr Stoltenberg and Mr Medvedev also discussed the positive results that have been achieved in the area of fisheries cooperation, and discussed developments in the cooperation to enhance nuclear safety in Norway’s neighbouring areas in northwestern Russia. Mr Stoltenberg raised Norway’s concerns over the continuing pollution from the Pechenga nickel plant.

Mr Stoltenberg and Mr Medvedev also visited the border between Norway and Russia at Storskog. As part of efforts to facilitate cross-border contact, Mr Stoltenberg and Mr Medvedev agreed to adjust the local border traffic permit zone on the Norwegian side of the border, to include the whole Neiden area. This will also give Russian permit holders access to the Russian war memorial in Neiden.

Two agreements were signed in connection with the meeting: an agreement on the exchange of information about the development and operation of the two countries’ border control stations at Storskog and Boris Gleb, and an agreement on establishing an exchange programme for young leaders in Norwegian and Russian companies and in the public sector.

The bilateral programme included a trip on board the University of Tromsø’s research vessel Helmer Hansen, during which Mr Stoltenberg and Mr Medvedev were given a demonstration of a joint Norwegian–Russian rescue operation. Mr Medvedev also laid a wreath at the Russian war memorial in Kirkenes, in a special ceremony to mark Russia’s huge effort for Norway during the Second World War and the Russian lives that were lost.