The Silver Tsunami is Coming to Norway

SSB's "This is Norway 2018" report reveals that the population in Norway is aging even if it is better than many other European countries.

We have heard talk about the silver tsunami for a long time, and in some respects we could say that it is already here, shows the new report by Norwegian Central Statistics Bureau (SSB)

SSB’s “This is Norway 2018” report reveals that the population is aging even if it is better than many other European countries.

While only about 8 per cent of the population was aged 67 and over in 1950, the figure today is almost 15 per cent, according to the report. In the years ahead, when the baby boomers retire, this figure will increase further to more than 18 per cent in 2030 and almost 23 per cent in 2050.

The aging population is expected to be much more prevalent in rural areas than in urban areas. The proportion of children under the age of 15 will continue to decline, and will be approximately 17 per cent in 2050. 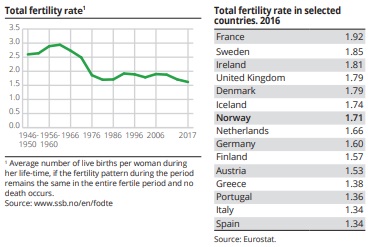 Better prospect for Norway compared to other European countries

The silver tsunami is partly due to the fact that the population is living longer (more people at the top of the population pyramid). Equally important is the declining fertility rate, which means less growth at the bottom of the pyramid. However, the silver tsunami has not been – and is not expected to be – as strong in Norway as in many other European countries due to the relatively high fertility rate and high net immigration of young people.

The post-war baby boom lasted until the mid-1960s and was then followed by a decline which reached its lowest point at the beginning of the 1980s. The fertility rate did increase somewhat thereafter, but with a declining trend in recent years, and is now at a record low. If we disregard immigration and emigration, the total fertility rate in a country must be approximately 2.1 to avoid a decrease in population in the long term. Norway has remained below this level since the mid-1970s.

The fall in the fertility rate in the past few decades is a general phenomenon in Europe, and relatively fewer children are born in many countries than in Norway. For example, the fertility rate in Italy and Spain was 1.3 in 2016. The highest fertility rates were found in France and Sweden, where only France has remained stable at approximately 2 in recent years.

Nearly six in ten born outside of marriage