Young Initiative Association (AYI) in Romania visited Norway to share the Romanian practices on NGO development and to launch a unique tool for strategic planning in NGOs.

This week at the Oslo based NGO, Norsensus Mediaforum, Razvan-Victor Sassu, Adela Fenichiu, Eliza Vas and Daniela Sima from the Young Initiative Association (AYI) visited from Bucharest, Romania. This is their second visit to Norway related to the  projects done in cooperation with Norsensus.

Last year, they visited Norway as a part of the NGO capacity building project Communication for Sustainability, which was funded by EEA & Norway Grants. This year, another EEA & Norway Grants funded project, NGO Innovation Romania – Norway, was the reason behind their visit. The project that involved creating a strategic planning game called RePlan was in its final stages and ready to be presented to NGOs in Norway. As their partners in Norway, Norsensus Mediaforum helped them further develop the Norwegian language version of the game and plan activities and the promotion of the project in Norway.

RePlan is a tool for NGOs that are in the process of creating or improving their current strategic plan. The game challenges players to consider their morals and whether they are in line with those of the NGO, it encourages players to acknowledge their NGO’s weaknesses and to work together to come up with alternative solutions if their current plan were to fail. 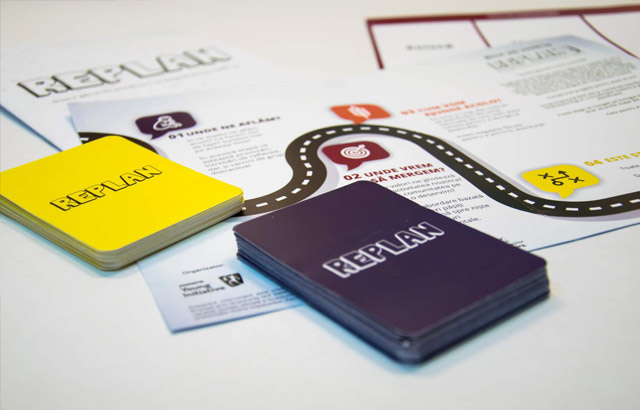 The highlight of the week was a seminar about the game and opportunities to collaborate with NGOs in Romania and sharing Romanian practices with Norwegian NGOs. The seminar was held at Deichmanske Public Library for representatives of various NGOs in Norway.

During the seminar participants were presented the activities done in Romania and discussed how they could use the Romanian experience in Norway. The participants got to network and learn from each other by engaging in activities where they were encouraged to share their successes and challenges related to their respective NGOs.

The RePlan game, which can take many hours to play in full, was thoroughly explained and demonstrated. Participants had the chance to play certain stages of the game and received a free copy of the game at the end.

The last days of their visit were spent visiting the Norwegian Helsinki Committee, KFUK-KFUM and LNU in order to promote RePlan and learn more about how NGOs play a role in Norwegian society and share the Romanian practices.

At the Norwegian Helsinki Committee, project manager Csilla Czimbalmos was excited to see the result of a project in which they were indirectly involved. She saw the potential that the game has to help NGOs make the planning process easier and more engaging.The Norwegian Helsinki Committee is responsible for distributing EEA & Norway Grants to further the development of civil society in foreign countries, including Romania.

At KFUK-KFUM Global, the members of the Young Initiative Association were able to present RePlan as well as their experiences as a YMCA (Young Men’s Christian Association) branch, which is something that both organizations have in common. KFUK-KFUM plans on using the game to give their new volunteers and employees a better understanding of what they stand for.

At LNU (The Norwegian Children and Youth Council), Fredrik Vaaheim gave the AYI representatives an introduction on how the NGO sector works in Norway and what role it plays in society.

RePlan is currently available in English, Romanian and Norwegian, but it is planned to be translated in other languages and disseminated all over Europe.