Norway Mobilizes against Controversial Dakota Access Pipeline in the USA

The protest in Oslo was led by Norway’s indigenous group, Sami’s church council.  Member of the Sami Church Council, Mikkel Eskil Mikkelsen said  that Dakota Access Pipeline is built through indigenous areas without consultation or consent, so they can not accept it as other similar oil pipelines has caused polluted water, writes NRK.

Demonstrations are organized by hundreds of organizations around the world, including the environmental organization Greenpeace.

– There are serious assaults against the people who are protesting in the USA. There are shooting by rubber bullets, tear gas, spraying with water cannons in freezing temperatures and arbitrary detention of demonstrators, says climate and energy adviser Martin Norman to NRK.

Norman says that they will show solidarity for those who are severely abused in Dakota, who try to protect their drinking water.

Pressure on DNB to Stop Funding

At the meeting, Greenpeace handed a letter to DNB and the other lenders of the construction of the oil pipeline Dakota Access Pipeline in the United States.

More than 400 organizations from 47 countries have signed the letter. The requirement for DNB is as followed:

DNB has already drawn investments from companies involved in the project.

The bank is still heavily involved in lending through its other holdings.

DNB has lent 4.7 billion NOK to the project, which makes about 15 percent of the debt financing the construction of pipeline.

Kaj Martin Georgsen, director of corporate social responsibility at DNB said that the company takes the demand seriously and assess both social, policy and procedures in this project.

– We will also assess the project according to the international standards, and come with recommendations to the project. This will form the basis for DNB’s assessment and further work on the issue, says Georgsen to NRK.

The drone operators of the #NoDAPL camp fly their drones above pipeline construction sites and law enforcement to inform protestors of activity in areas they cannot otherwise see.

About the pipeline and protests

The Dakota Access Pipeline protests, also known by hashtags such as #NoDAPL, are grassroots movements that began in the spring of 2016 in reaction to the approved construction of Energy Transfer Partners’ Dakota Access Pipeline. The approved pipeline would run from the Bakken oil fields in western North Dakota to southern Illinois, crossing beneath the Missouri and Mississippi Rivers, as well as part of Lake Oahe near the Standing Rock Indian Reservation. In April, LaDonna Brave Bull Allard, a Standing Rock Sioux elder, established a camp as a center for cultural preservation and spiritual resistance to the pipeline. Over the summer the camp grew to thousands of people and millions of people have joined the Standing Rock protests on social media.

The Standing Rock Sioux Tribe filed suit against the Corps of Engineers, accusing the agency of violating the National Historic Preservation Act and other laws.

While the protests have drawn international attention and have been said to be “reshaping the national conversation for any environmental project that would cross the Native American land”, there was limited mainstream media coverage of the events in the United States until early September. On September 3, construction workers bulldozed a section of land the tribe had identified as sacred ground in an amendment to the federal injunction a day earlier. When protesters entered the area, security workers used attack dogs, which bit at least six of the protesters and one horse. The incident was filmed and viewed by several million people on YouTube and other social media. In late October, armed soldiers and police with riot gear and military equipment cleared an encampment that was directly in the proposed pipeline’s path. 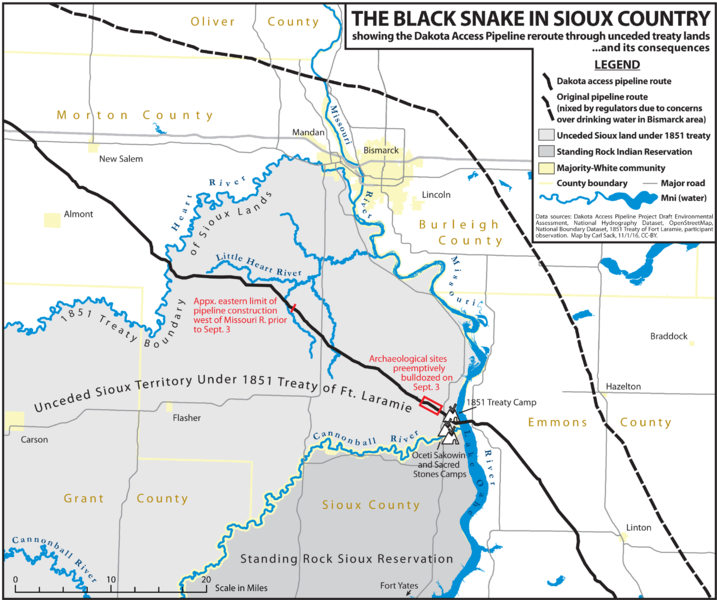 In late November, on and around the Thanksgiving holiday, many new participants ventured from across the United States to join the protesters; fluctuating numbers of protesters remained in the thousands. The weather worsened, with snowfall and temperatures dropping well below freezing. Police use of water cannons on protesters shortly before the holiday drew significant media attention. Officials claimed that the water was used to put out fires, purportedly started by protestors, and to move people off of the bridge leading up to the barricade to keep them out of danger. This narrative was proven false, however, with the release of camera footage captured by journalist Jordan Chariton, clearly showing that there were no fires on the bridge and that the water cannons were used directly against protesters, solely for the purpose of pushing them away from the barricade. This footage also showed protesters putting out grass fires started by tear gas canisters that had been fired by police.

By November 29, a number of federal officials took an interest in the protest, with some calling on U.S. Attorney General Loretta Lynch to investigate the law enforcement tactics against protesters, and one (Tulsi Gabbard of Hawaii) planning to join protesters a day ahead of a scheduled “eviction” of protesters from the site.