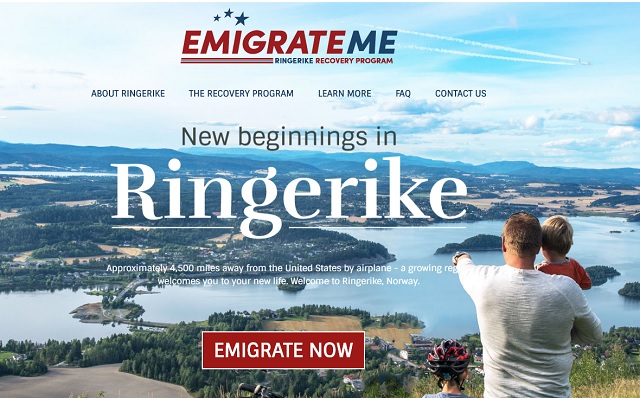 Regional development company of Ringerike has built a website offering acute aid to descendants of emigrated Norwegians, and other Americans, considering a new start abroad after the results of the U.S presidential election.

Americans will get help in the form of “Lars Hall plan”, “Kjellp” and “Per Care”, inspired by “Marshall Aid”, the US’s development program developed after the second world-war.

– The Norwegian society is transparent and well organized. We believe our highly developed welfare state is the best. Not only are we among the richest countries in the world, but the United Nation’s Human Development Index has ranked us the world’s best country to live in — 12 years in a row. That’s facts, writes the website Emigrateme.

The answer of the website is yes. “We have extended invitations to Miley Cyrus, Bryan Cranston, Cher, Samuel L. Jackson and Jon Stewart to name a few. Who knows — maybe you’ll be neighbors in Ringerike?”, writes the website jokingly.

Talkingt to Framtida, the concept developer Pelle Gangeskar says that the company Ringerike development is behind the stunt, and the goal is to promote greater economic growth in municipalities Hole, Jevnaker and Ringerike.

– We started designing the website at 19:00 Wednesday night, and the website was operational from 11.00 pm. Canada’s immigration sites was crashed, but ours works !, says he.

After they launched the campaign several people contacted them.

– About 15 American families have contacted us, and we are ready to handle increased demand through the weekend.