UNICEF delivers good results in the field, and is an important partner for Norway in our global education initiative,’ said Minister of Foreign Affairs Børge Brende.

Today Brende and Executive Director of UNICEF Anthony Lake signed a two-year funding agreement for a  total of NOK 1.3 billion for 2015 and 2016. The share that is earmarked for education has been increased by NOK 50 million compared with the previous agreement. Brende and Lake met in Oslo during the Education for Development summit in Oslo, where heads of state and government, government ministers and key actors in the field of education have come together to intensify global education efforts.

‘The world faces major challenges in terms of access to education. If developments continue at the current rate, it will take 100 years before girls in remote areas have access to education. More than 90 % of children with disabilities in developing countries do not go to school. The funding from Norway will be mainly be used to ensure that girls and the most vulnerable groups have the opportunity to get an education,’ said Brende.

UNICEF is a key partner for the Government in the follow-up of its global education initiative, where education in crisis and conflict situations, high quality education and education for girls are the main priorities.

‘We know that educating girls doesn’t only benefit the girls concerned, but also their future children and families, and society as a whole. We know that girls who complete secondary school get married later, and have children later, which reduces maternal and child mortality. Education also gives better opportunities for paid work and thus contributes to development and growth,’ said Brende.

In addition to education, the Norwegian funding will also support UNICEF’s efforts in the fields of water, sanitation and hygiene, as well as child protection and social inclusion. Norway also gives considerable support to UNICEF in the form of core funding, humanitarian aid, and aid at country level. Norway is one of the largest donors to UNICEF worldwide. 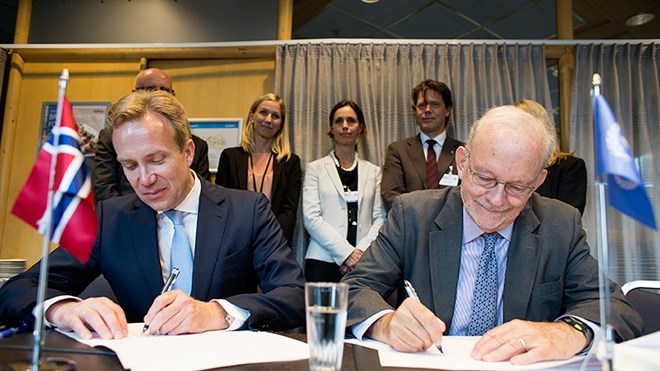 Brende and Executive Director of UNICEF Anthony Lake signed a two-year funding agreement for a total of NOK 1.3 billion for 2015 and 2016 in Oslo 6 July 2015. Credit: Norway MFA/Espen Røst