Nine students from Dimitrie Cantemir (Babadag), Colegiul National Liviu Rebreanu, Colegiul Tehnic Infoel (Bistrita) and Colegiul National Mihai Eminescu (Botosani), together with their teachers, made a study visit to Oslo in the period of 16-21 May, under a program designed to present their advocacy works, familiarize them with the rule of law, democracy and the mechanisms that ensure the functioning of good governance.

The event was arranged as a way of enriching the knowledge and boosting cooperation between teenagers in both Norway and Romania, their civic participation to increase in democratic decision making process. Equally, the visit aimed to contribute to improving mutual understanding between Romania and Norway, and to promote a positive image of Romania in Norway.

Deputy Minister Ingvild Stub Næss hosted the Romanian team for over an hour, and the students presented their advocacy campaigns that were designed and implemented to produce a positive change about pressing issues such as bullying and discrimination at local levels.

Also the visit gave chance the students and teachers to interact with Norwegian students, teachers, politicians, activisits, journalist and familiarizing with education system in the country. 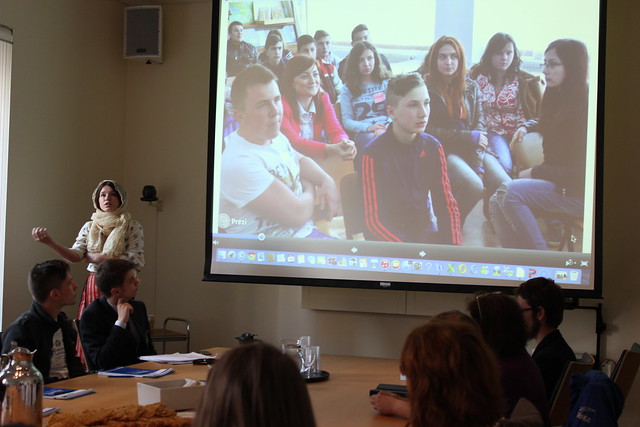 The nine students were the winners of the advocacy campaign competition organized in the media and advocacy skills program for high school students, between April 2014 – July 2015. The project was implemented by ICJ Romania in partnership with Norwegian Norsensus MediaForum, and financed by EEA Grants 2009-2014 in NGO Fund for Romania.

The visit – organized by the CJI, in partnership with Norsensus Media Forum – was funded by the Romanian Ministry of European Funds in the frame of the Fund for Bilateral Affairs, through the EEA and Norway Grants 2009-2014.