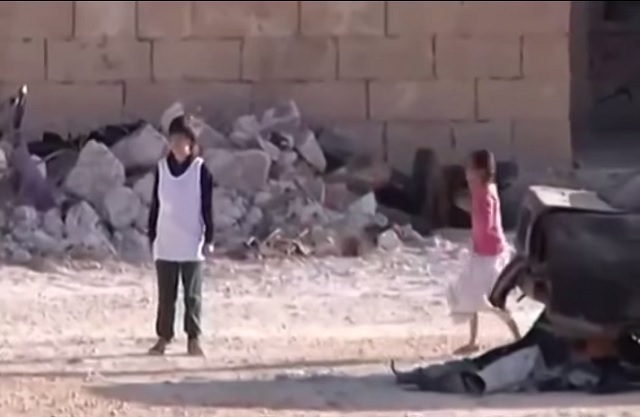 Last week , the video, supposedly showing a young boy saving a girl while under gunfire in Syria, went viral. Millions of YouTube viewers have been captivated by the ’Syrian hero boy’. But the Norwegian filmmaker has admitted to BBC Trending they are behind it. They said it was filmed on location in Malta this summer with the intention of being presented as real.

Director Lars Klevberg said he wrote the script after watching news coverage of the conflict in Syria. He claimed he deliberately presented the film as reality in order to generate a discussion about children in conflict zones.

This confession has started a heated ethic and financial debate about the film. The short film has received financial support from the Norwegian Film Institute and other inistitutions in total of 366.000 NOK (54.000 USD).

Talking to TV2, the Norwegian Film Institute representative Åse Meyer said they have discussed the ethical aspects of publishing their movie without disclosing that this is fiction.

– We have had meetings with the producer and director and we discussed that it was important that they should not actively sent the film out to the media, but rather upload the clip on YouTube. Then it is up to the media to pick it up, says Meyer to TV2.

On the other hand, the Norwegian Press Association (Norsk Presseforbund) Secretary General Kjersti Løken Stavrum reacted strongly to the way the war video is presented in that way.

– I believe this is unethical. It is very devastating for anyone who conveys or attempts to convey important information, and moreover, it is devastating for all who rely on foreign involvement. He believes that the film makers should withdraw the video and apologize from the public.

Also TV2’s foreign reporter Paul T. Jørgensen criticized the film. He says director has been in the Syrian regime’s favor by creating such a fake war video.

– Assad regime has constantly tried to undermine the credibility of video activists in Syria, including when the regime used chemical weapons against its own citizens, said Paul T. Jørgensen in a discussion with the filmmakers on Sunday .

The British journalist and blogger Eliot Higgins also believes the film project has done damage to the activists in Syria.

– Already I see that the video is being used by conspiratorial individuals as evidence that it is easy to create fake war videos, Higgins writes in an e-mail interview with TV2.

In a statement, the filmmakers Lars Klevberg and Petter Løkke wrote it has never been their intention to mislead anyone and they regret the outcome.

– We have tried to focus on children as victims of war, an issue we fight and are passionate about. It’s a shame that this has come out so wrongly. It is clear that there have been mistakes from our side. We were overwhelmed by the great attention the film got in a very short time, both in online communities and the larger media. We needed time to deal with how to notify, but realize that we should have informed earlier, they write.

The Video which went viral on Youtube in short time