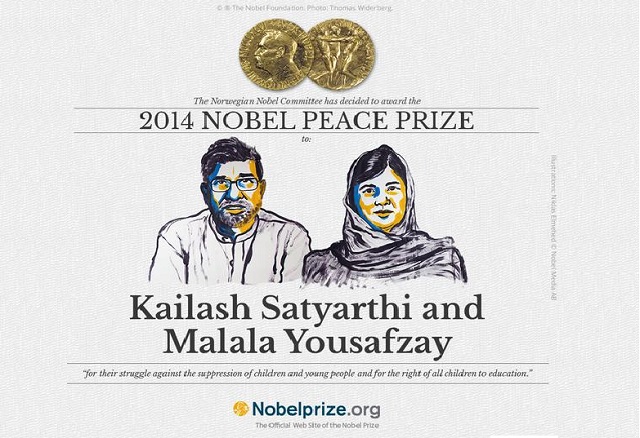 Jagland said they deserved the award for their fight against the oppression of children and adolescents, and for children’s right to education.

Yousafzai has become known as education campaigner who survived a Taliban assassination and was already many people’s favorite last year to receive the Nobel Peace Prize.

When she visited the Norwegian royal family in June this year she shared her thoughts about the prize:

– I should not get the Peace Prize right now, because it’s just too early. But when I build hundreds of schools and thousands of children are in school and receive education of good quality – when I’ve reached my goal – then I will deserve it, said she.

Indian Kailash Satyarthi shares the prize. He is not as famous as Malala Yousafzai but he has been central in the fight against child labor. He started this already in the 1990s with marches and demonstrations in India.

In 1994 he became very famous when he contributed to carpets should have marks showing that they have not been produced by children.

The prize is awarded in Oslo City Hall on 10 December

A total of 278 candidates, including 47 organizations were nominated for this year’s award, writes VG.

The Nobel committee members had difficulty in agreeing on the winner until last week.

278 is the highest number of nominations ever. The previous record was 259 nominations, and was set in 2013.