Antonov An-124-100 has landed in Norway for carrying equipment from the military exercise Cold Response in March this year. 16,000 soldiers from 16 nations came to Northern Norway to take part in the exercise Cold Response 2014. In addition to Norway, Belgium, Canada, Denmark, Estonia, Germany, France, Ireland, Lithuania, the Netherlands, Poland, Spain, Sweden, Switzerland, the United Kingdom, and USA joined in the military exercise.

The Russian airplane will take the equipments of the exercise to Germany.

The giant airplane is a strategic airlift jet. It was designed by the Antonov design bureau in the Ukrainian SSR, then part of the Soviet Union. The An-124 is the world’s highest gross weight production cargo aeroplane and second heaviest operating cargo aircraft.

The An-124 has been used to carry yachts, aircraft fuselages, a 109 tonne locomotive from Canada to Ireland in September 2001, and a variety of other oversized cargoes. The aircraft is able to kneel to allow easier front loading; and has an onboard overhead crane capable of lifting up to 30 tonnes of cargo, and items up to 120 tonnes can be winched on board. 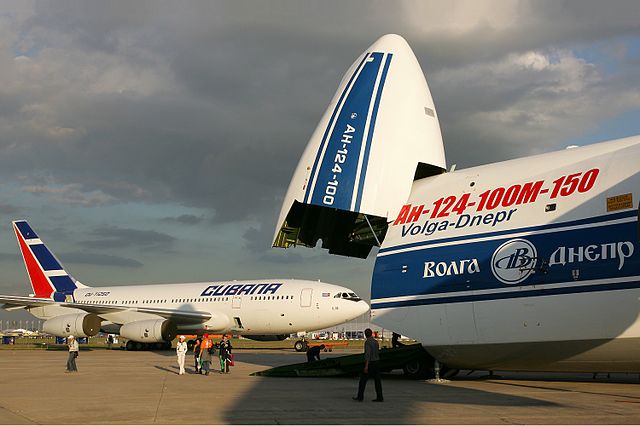