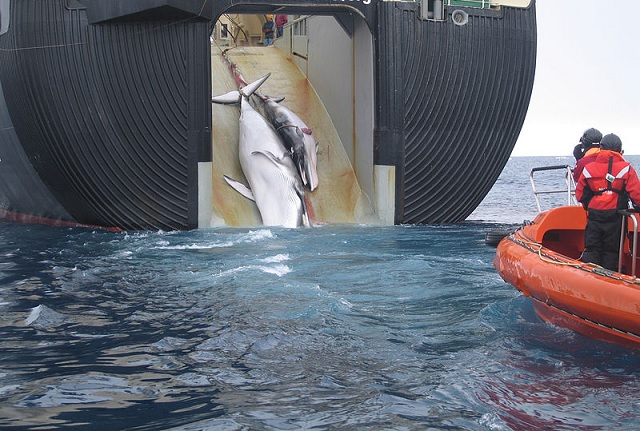 “This year too, we have decided on a quota
which guarantees continuity and a good framework for the whaling sector,”
said Fisheries Minister Elisabeth Aspaker, writes Phys.org.

Norway is not the only one in the
discussion of whale hunting. On Monday the International Court of Justice(ICJ)
in the Hague ordered Japan to end Antarctic whaling.  Phys.org reported
that on Thursday Japan said it would honor Monday’s judgement from ICJ and
canceled its annual Antarctic whaling hunt for the first time in more than 20
years. Japan has used a legal loophole in the 1986 ban on commercial whaling
that allowed it to continue whaling to gather scientific data. But the doubt of
whether the whale meat goes to laboratory or dinner table has never stopped.

Unlike Japan, whaling in Norway is
conducted commercially without any claim for research or other justification, claims International Whaling Commission.

According to the International Whaling
Commission(IWC), in 1982 they decided that there should be a pause in
commercial from the 1985/1986 season onwards, often referred to as the
commercial whaling moratorium. This moratorium bounds most of the members of
IWC. But Norway objected and has never stopped whale hunting. In the IWC’s data
for catches taken under objection or under reservation, Norway is the only country in the world that is on this list for 12
years, from 1993 to 2005. Iceland joined in since 2006, but Norway still
occupies around 90% of the total catches.

In 2013, reports Phys.org, 594 whales
were killed, far way from the quota. It seems the demand for whales is
declining, which makes it more difficult for the county to defense itself on
keeping a high quota when the market doesn’t even want it. Allvocies says
Norwegians consume the whale meat, but not the whale blubber, most of which is
wasted. There is no big export demand for whale meat as the whole EU has banned
commercial whaling for a long time.The only market importing Norwegian
whale-meat is Japan.

Noway has always enjoyed a high
reputation in ethical issues, a model of democracy that many countries look up
to. The famous Government Pension Fund of Norway, has banned tobacco and is
under discussion on banning fossil fuels. NOK 10 billion has been lost due to
ethical considerations from the fund.