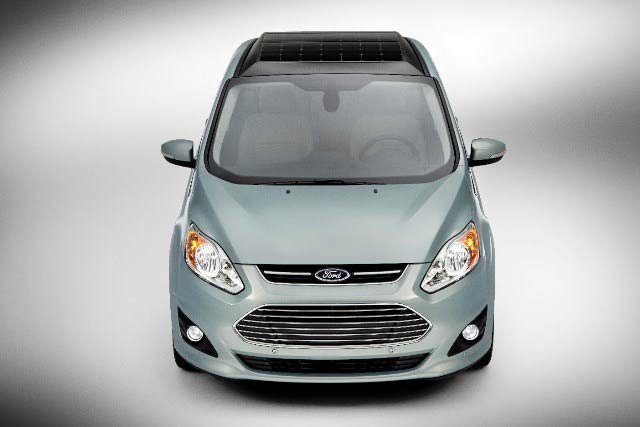 Ford Motor Company announced in the beginning of January the C-MAX Solar Energi Concept, a first-of-its-kind sun-powered vehicle with the potential to deliver the best of what a plug-in hybrid offers – without depending on the electric grid for fuel.

Instead of powering its battery from an electrical outlet, Ford C-MAX Solar Energi Concept harnesses the power of the sun by using a special concentrator that acts like a magnifying glass, directing intense rays to solar panels on the vehicle roof.

The result is a concept vehicle that takes a day’s worth of sunlight to deliver the same performance as the conventional C-MAX Energi plug-in hybrid, which draws its power from the electric grid. Ford C-MAX Energi gets a combined best miles per gallon equivalent in its class, with EPA-estimated 108 MPGe city and 92 MPGe highway, for a combined 100 MPGe. By using renewable power, Ford C-MAX Solar Energi Concept is estimated to reduce the annual greenhouse gas emissions a typical owner would produce by four metric tons.

“Ford C-MAX Solar Energi Concept shines a new light on electric transportation and renewable energy,” said Mike Tinskey, Ford global director of vehicle electrification and infrastructure. “As an innovation leader, we want to further the public dialog about the art of the possible in moving the world toward a cleaner future.”

C-MAX Solar Energi Concept, which will be shown at the 2014 International CES in Las Vegas, is a collaborative project of Ford, San Jose, Calif.-based SunPower Corp. and Atlanta-based Georgia Institute of Technology.

C-MAX Energi is Ford’s plug-in sales leader, with sales of more than 6,300 through November. Ford sold more plug-in vehicles in October and November than both Toyota and Tesla, and it outsold Toyota through the first 11 months of 2013. Plug-in hybrids continue to grow in sales as more customers discover the benefits of using electricity to extend their driving range.

C-MAX Hybrid over the last year has been a key driver in helping Ford sell more hybrids than any other automaker in the United States, second only to Toyota. C-MAX Hybrid continues to bring new customers to the Ford brand, with a conquest rate of 64 percent and drawing nearly half of its sales from import brands. Conquest rates are even higher in key hybrid growth markets like San Francisco, Los Angeles and Washington, D.C.

SunPower, which has been Ford’s solar technology partner since 2011, is providing high-efficiency solar cells for the roof of Ford C-MAX Solar Energi Concept. Because of the extended time it takes to absorb enough energy to fully charge the vehicle, Ford turned to Georgia Institute of Technology for a way to amplify the sunlight in order to make a solar-powered hybrid feasible for daily use.

Researchers developed an off-vehicle solar concentrator that uses a special Fresnel lens to direct sunlight to the solar cells while boosting the impact of the sunlight by a factor of eight. Fresnel is a compact lens originally developed for use in lighthouses. Similar in concept to a magnifying glass, the patent-pending system tracks the sun as it moves from east to west, drawing enough power from the sun through the concentrator each day to equal a four-hour battery charge (8 kilowatts).

With a full charge, Ford C-MAX Solar Energi Concept is estimated to have the same total range as a conventional C-MAX Energi of up to 620 miles, including up to 21 electric-only miles. Additionally, the vehicle still has a charge port, and can be charged by connecting to a charging station via cord and plug so that drivers retain the option to power up via the grid, if desired.

After C-MAX Solar Energi Concept is shown at CES, Ford and Georgia Tech will begin testing the vehicle in numerous real-world scenarios. The outcome of those tests will help to determine if the concept is feasible as a production car.

By tapping renewable solar energy with a rooftop solar panel system, C-MAX Solar Energi Concept is not dependent on the traditional electric grid for its battery power. Internal Ford data suggest the sun could power up to 75 percent of all trips made by an average driver in a solar hybrid vehicle. This could be especially important in places where the electric grid is underdeveloped, unreliable or expensive to use.

The positive environmental impact from Ford C-MAX Solar Energi could be significant. It would reduce yearly CO2 and other greenhouse gas emissions from the average U.S. car owner by as much as four metric tons – the equivalent of what a U.S. house produces in four months.

If all light-duty vehicles in the United States were to adopt Ford C-MAX Solar Energi Concept technology, annual greenhouse gas emissions could be reduced by approximately 1 billion metric tons.