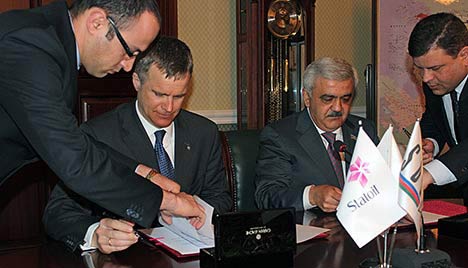 The agreement was signed in Baku by SOCAR (State Oil Company of the Republic of Azerbaijan) president and CEO Rovnag Abdullayev and Statoil CEO Helge Lund. During his visit Lund also met with Azerbaijan president Ilham Aliyev to discuss the MoU and Statoil’s role in the energy sector in Azerbaijan.

The MoU defines the framework within which the companies will explore the opportunities, conduct negotiations and agree on key commercial principles and terms during the 12 months from the date of memorandum signing.

Commenting on the agreement, Lund said the signed document brings the Statoil and SOCAR partnership to a new level.

“This MoU reflects our long-term commitment to Azerbaijan. We are pleased that the State Oil Company of the Republic of Azerbaijan is working closely with us as we progress with our plans for the further development of the Caspian area,” says Lund.

Statoil has been successful in its exploration efforts over the last few years with several high-impact discoveries offshore Norway, Tanzania and Brazil. The new agreement fits well with Statoil’s exploration strategy of gaining access at scale and focusing on high-impact opportunities.

“We look forward to sharing our knowledge and cooperating with our Azerbaijani partners to explore the potential of the Caspian Sea,” says Lund.

“Statoil has been present in Azerbaijan for more than 20 years and this agreement is an illustration of the strength of cooperation that exists between SOCAR and Statoil. We look forward to developing new prospects in cooperation with SOCAR,” says president for Statoil in Azerbaijan Lars Troen Sørensen.