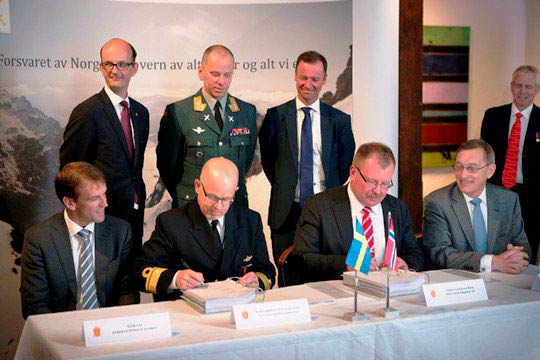 The project includes both new and upgraded vehicles and has an overall budget of NOK 10 billion/USD 1.6 billion. Today Norway initiated this effort by signing a contract worth nearly NOK 6 billion/USD 1 billion with main supplier BAE Systems Hägglunds.

“Today we mark a great event and it is very gratifying that my Swedish colleague, Secretary Carl von der Esch had the opportunity to participate in this ceremony,” says Roger Ingebrigtsen, State Secretary in the Norwegian Ministry of Defence. “For the Armed Forces and the Army, this is a significant milestone. When the contract between the Norwegian Defence Logistics Organisation (NDLO) and BAE Systems Hägglunds was signed, it initiated the next phase of the renewal of the Army’s combat capabilities and its continuing modernisation.”

The project is the largest acquisition project within the Norwegian Army since the end of the Cold War, and is essential for realizing the force structure recommended in the new long-term defence White Paper for the Armed Forces. Along with the procurement of the F-35, this project is considered a key priority by the Norwegian Ministry of Defence.

Sweden also operates the CV90, and has nearly 20 years of experience with the system. “This acquisition is a good example of how Nordic defence cooperation remains strong and active, and of the fact that the Nordic countries are manufacturers of high-end military equipment,” says State Secretary Ingebrigtsen. “While a Swedish company is the main supplier, this acquisition will also be very important for Norwegian industry,” says Mr Ingebrigtsen.

“This is one of the largest investments ever made in the Army. Delivery will take place between 2015 and 2017, and forms an important part of our overall modernisation efforts and will provide the Armed Forces and the Army with the capabilities they need to carry out future operations both domestically and internationally. The new armoured vehicles will among other things provide significantly better protection and surveillance equipment for our forces,” says Rear Admiral Morten Jacobsen of the NDLO.

Today BAE Systems Hägglunds also committed to initiate industrial cooperation with Norwegian industry equal to the value of the main body of the project. This is regulated in a separate agreement with the Norwegian Ministry of Defence. The agreement has a significant scope and will include cooperation with businesses and industries across Norway.

Norwegian industry has a key role in the modernization of the CV90. Kongsberg Defence & Aerospace, Thales Norway and Vinghøg are major subcontractors in areas such as computers, communications and armaments. “We have agreed to structure the industrial cooperation in such a way that it strengthens the capacity of Norwegian industry to both develop and manufacture systems within key technology sectors that remain important to the Norwegian Armed Forces, concludes State Secretary Ingebrigtsen.

Facts about the project:

• Today’s contract announcement follows the introduction of the Norwegian defence White Paper on 23 March 2012, and the announcement of the selection of BAE Systems as the prime contractor on the 20th of April 2012.

• The Army currently has 103 CV-90 Infantry Fighting Vehicles. The vehicles were acquired from the mid-1990s onwards, and have proven both reliable and dependable while in service with the Norwegian Army.

• However, the development of combat vehicles continues and there is a requirement to provide the CV90-fleet with new capabilities in the form of increased mine protection, network integration (including command and control systems), self-protection in the form of remotely controlled weapon stations and rubber band tracks for improved mobility.

• Furthermore, there is a need to improve the standardisation of the Army’s fleet of armoured vehicles to help reduce maintenance and logistics costs. The new CV90 fleet is therefore intended to replace some of the existing M113 vehicles in support roles.

• The procurement will be a combination of new CV-90 hulls, upgraded and redesigned existing CV90s from the current fleet of 103, and upgraded turrets.

• The project will deliver a total of 146 remanufactured / new CV-90s. In addition, it will include unmanned ground and aerial vehicles, various ground sensors and communications systems.

• The outstanding budget, i.e. the difference between the NOK 6 billion/USD 1 billion awarded today and the complete budget of NOK 10 billion/USD1.6 billion is expected to be comprised of:

• The exact division of funds between these capabilities is not available at this time as contract negotiations continue.

• There is also a significant financial buffer within the project based on mandatory uncertainty assessments.