A Decade of Frustration – Newspaper Headlines 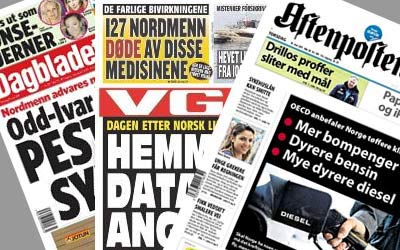 Dagsavisen gives the recent demonstrations against NATO bases including Norwegian base in Afghanistan with the title: “A Decade of Frustration”. The newspaper writes that Afghans' protest against the burning of the Koran is an expression of social discontent and frustration and The Norwegian forces are also prepared for new demonstrations.

VG's headline is Cheap Copy is Equally Good. The newspaper's main story compares the prices and the quality of different food brands'  products such as cheese and salami. According to the article, the foods provided by low-cost brands are equally good.

The children photos covering the top of the main story is about the new queens of Europe. VG lists the names and photos of the youngest queens of the royal families in European countries.

Dagbladet today decides to be interested in yesterday's Lysbakken case. The title of the article is “Hidden Truth” and it gives the details of the recent controversial fund allocation to some civic organizations connected with the coalition government's member Socialist Left Party (SV). It is claimed that the Minister of Children and Equality from SV, Audun Lysbakken appropriated NOK 500,000 for self-defense courses for girls last fall but the grant was announced and provided to only party's own youth politicians and sub organizations.

The rest of the front page is full of health and beauty tips: “How do you smile perfectly” is one of them.