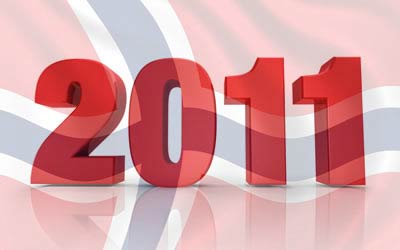 Glorious victories in winter sports, coupled with political and financial turmoil and heart-wrenching tragedies made the headlines in 2011. The Nordic Page sets out to define the top Norwegian news topics of 2011.

Weather Talks were Cold and Stormy

It probably came as a surprise to most Norwegians, but the first days of 2011 started moderately warm. January 2011 was not the warmest yet for Norway, which has experienced the climbing worldwide temperatures in recent years, but the country was much warmer than had been anticipated. But this short string of unseasonal warmth ended after few days. Exceptional cold weather came and Norway braced itself for one of the coldest winters on record, with temperatures hitting minus 40 degrees Celsius in some regions.

Another extraordinary situation regarding weather this year was the density of floods and storms. June and July were marked with flood news from Northern Norway. The floods caused transportation problems in several areas, and the important E6 highway was closed for a long time. Then, in November, Norway faced the storm «Berit», which took several lives. And most curiously, the last month of the year came as a surprise with no snow and some shiny spring-like days at around 10 C.

Norwegian of the Year is Deported

The deportation of Marie Amelie and her extraordinary story drew attention to the “shadow people”  in Norway- undocumented immigrants. Madina Salamova, commonly known under the pseudonym Maria Amelie, is a Russian born author and journalist who became known in Norway as the author of the book “Illegal Norwegian”. Amelie and her family fled from Russia and went to Finland in October 2000 searching for asylum, but their application was denied. In October 2002 the family went on to Norway and also applied for asylum there. They were again rejected in 2003 and were thus obliged to leave Norway, but chose to live in hiding. For the last eight years Maria and her family lived illegally at an undisclosed address in Norway. During their stay, Maria has earned a university degree from NTNU in Trondheim and has written a book in perfect Norwegian. The book is based on Amelie’s diaries, blog entries and memoirs about her life as a person without legal residence in Norway, or as a so-called “paperless”. Her authorship of the book brought her the title of “Norwegian of the Year” in 2010, a prize given by the Norwegian weekly news magazine, Nytid, and was awarded based on her contributions on bringing the illegal immigration issue to the table and on her courage to reveal such a story that would put her own life in danger. Subsequently, Amelie was arrested by the police in January 2011 and deported to Russia. The arrest, which attracted great attention, occurred just after she gave a lecture at the Nansen Academy in Lillehammer. The same evening, as Maria Amelie was arrested, a support group was set up on Facebook and in one day the group reached to 60 000 members. On the 13th of January, protests were held in Oslo, Trondheim, Bergen, Stavanger, Tromsø, Tønsberg and Kristiansand. In the following days, civic organizations had organized protests, including a demonstration outside the palace. The Norwegian Public divided into two camps of public opinion. Some argued that she should have stayed in Norway because of her close connection and integration into Norwegian society, as opposed to her relationship with Russia, where she had lived only her first 11 years. However, some people support the decision to deport, as they advocated that there must be equality before the law and to allow Maria Amelie residence would send out the wrong signals to those who stay in the country illegally.  After several months, Maria was hired by a Norwegian company and has returned to Norway.

VG and E24 revealed that the state-owned investment company Argentum has invested in 27 funds in the tax havens Jersey and Guernsey.  Politicians in opposition protested Argentum’s channeling of billions through tax havens, while Norway officially fights against tax heavens. The government spokesperson argued that parliament did not know about the situation. CEO of Argentum, Joachim Hoegh-Krohn, said the company has nothing to hide and they have to consider their profit as an organization.

The government revised the scope of Norway’s presence in Afghanistan after ongoing debates about the war’s cost, previous year’s fatalities and rising skepticism about the country’s mission among Norwegians. The Previous Defense Minister Grete Faremo announced Norwegian efforts in the country would be more humanitarian based and the training and logistic activities would be intensified.

Conversely, Norway took the lead in NATO’s military operation against Libya. Six Norwegian fighter jets were among the most successful in bombing targets in civil war-stricken Libya. U.S. Defense Secretary Leon Panetta praised Norway for participation in military action in front of NATO defense ministers and praised the small country for having destroyed as many targets as France.

After several weeks, Norway first scaled down its fighter jet contribution in Libya from six to four planes and withdrew completely from the NATO-led operation by August 1.

The Norwegian Nobel Committee decided the Nobel Peace Prize for 2011 would be awarded to Liberia’s President Ellen Johnson-Sirleaf, together with peace activists Leymah Gbowee and Tawakkul Karman. They won the prize “for their non-violent struggle for the safety of women and for women’s rights to full participation in peace-building work. Sirleaf is the first and currently only elected female head of state in Africa, Leymah Roberta Gbowee is an African peace activist responsible for organizing a peace movement that brought an end to the Second Liberian Civil War in 2003. Tawakel Karman is a Yemeni politician who is a senior member of Al-Islah and a human rights activist who heads the group Women Journalists Without Chains, which she founded in 2005.

A Colorful Representation in Eurovision

Eurovision Song Contest 2011 was a history for Norway, Norwegian-Kenyan singer Stella Mwangi represented Norway with the song “Haba Haba” in Düsseldorf, Germany on May 10.   Previously Swedish Elisabeth Andreassen, and Belarusian Alexander Rybak had participated in the contest for Norway, Stella has become the first Norwegian of African origin to represent Norway on an international scale. Sadly, she failed to qualify for the Eurovision final, though she earned a reputation as a crowd-favorite in the contest.

Full of Victory and Pride in Winter Sports but Football

Norway hosted the Nordic World Ski Championships 2011 from 23 February to 6 March in Oslo. It was the fifth time these championships had been hosted in Holmenkollen ski area in the capital, having hosted previously in 1930, the 1952 Winter Olympics, 1966, and 1982. Cross-country skiing was dominated by Norway: Marit Bjørgen won four gold and one silver, while Petter Northug won 3 gold and two silver. The Norwegian team managed to pick up 8 gold, 6 silver and 6 bronze medals and carried Norway to first place at the end of the games. After Oslo, the Norwegian women’s skiers turned in another successful performance in the Cross Country World Cup in Finland in November.

However, the men’s football team, with the legendary Norwegian coach Drillo, failed to reach the European championship 2012, ending in the third round, even though they gave an impressive performance in the beginning.

At home there was a surprise in Tippeligaen football league. After dominating Rosenborg’s titles in last ten years, Molde became league champions for the first time in the club history.

There was also a surprise result in the 106th final of the Norwegian Football Cup. It was played on 6 November 2011 at Ullevaal Stadion, Oslo between Brann and Aalesund. The winner, Aalesund, earned a place in the second qualifying round of the 2012–13 UEFA Europa League.

Historic Local election under the Shadow of 22 July Tragedy

Nationwide local elections for seats in municipality and county councils were held throughout Norway on 12 September 2011. Overall, the Conservative Party (Høyre) made the greatest gains, and the Labour Party (Ap), as the main target of the terrorist attacks on 22 July, also advanced and remained the largest party. However, the Progress Party (FrP), hit by scandals and political crisis and the Socialist Left Party (SV) suffered severe setbacks.

Participation to the 2011 elections was a record high. Moreover, Norwegian voters got chance to vote via the internet for the first time.

The integration report from the Labor Party’s integration committee was published on the 9th of February. Some proposals in the report presented by the Foreign Minister, Jonas Gahr Støre, were interpreted as electoral moves against the Progress Party.  The proposed integration policy report, containing 99 action points, included many populist measures for integration such as the introduction of a mandatory completion of 600 hours of Norwegian language courses, community education, restricting private schools and close oversight of religious communities’ activities.

Norway’s right-wing party FrP has been shaken with consecutive sex scandals and political crisis this year. In March, a leading local FrP politician Trond Birkeland was arrested on the charges of sexual abuse against a child under the age of 16.

In September, Another FrP MP Bård Hoksrud had to resign from all his posts after TV2 revealed that he had paid for sex with a prostitute while on a weekend trip to Riga in Latvia.

Then in November, Henning Skumsvoll, a Parliamentary Politician from FRP, was prosecuted for rape and sexual harassment of a local politician in the same party. A Member of Kristiansand City Council, Beate Helland of the Progress Party(FrP) claimed Skumsvoll had sexually abused her.

Earlier, the party had experienced a clash between the previous leader, Carl I Hagen and current leader Siv Jensen. The symbolic name of the party, Hagen first resigned from the party’s central executive committee and accused Siv Jensen of having a naive management style and being incapable of ruling the country.

The party paid for all of these internal problems with a -6.1% fall in the local elections.

A Turning point for Norway and Europe: 22 July

The 2011 sequential terrorist attacks against the government, the civilian population and a summer camp on 22 July 2011 were the biggest tragedy for the country since World War II.

The first attack was a car bomb explosion in Oslo within Regjeringskvartalet, the executive government quarter of Norway, killing eight people and wounded several others, with more than 10 people critically injured. The second attack occurred less than two hours later at a summer camp on the island of Utøya. The camp was organized by the youth division of the ruling Norwegian Labour Party. A gunman dressed in an authentic looking police uniform and showing false identification gained access to the island and subsequently opened fire at the participants, killing 69 young participants between 14-19 and camp personnel. The right-wing terrorist, Anders Behring Breivik was charged with both attacks.

After the massacre, in which a homegrown extreme-right citizen killed dozens of people, immigrants and the native Norwegian population showed an exceptional solidarity together. The dreadful attacks also started a debate in both Norway and Europe about the failures of the multiculturalism debate and showed the “fight against terror” must include combating racism, intolerance and xenophobia.