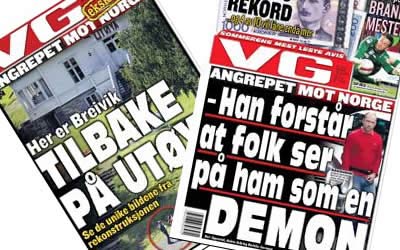 In Sunday's print edition of VG and the newspaper's website, terrorist Breivik's images were served yesterday, when he was explaining police what happened on Utøya on 22 July. Reaction to VG's photos have been strong on both Facebook and Twitter, while the other newspapers published articles harshly criticizing VG.

VG editor Per Edgar Kokkvold, on the other hand, said to Aftenposten that he does not think they should hide away Behring Breivik and he is part of Norway's reality.