Both Bin Laden and Breivik are Terrorists 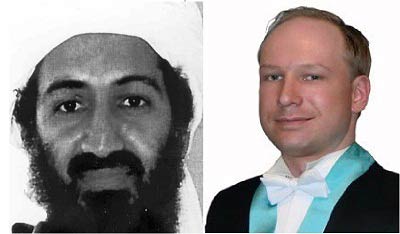 In his article in Huffingtonpost, he called both Breivik and Oklahoma Bomber as Christians terrorists, despite reaction when the Norwegian mass murderer Anders Behring Breivik is described as a “Christian terrorist”.

He agreed that Breivik was much more concerned about politics and history than about scripture and religious belief. But pointed out much the same can be said about Osama bin Laden, and Ayman al-Zawahiri. Juergensmeyer reminded Bin Laden was a businessman and engineer, and Zawahiri was a medical doctor; neither were theologians or clergy. He stated they imagined themselves as recreating glorious moments in their own imagined wars.

The author also points out that Anders Behring Breivik writes about al Qaeda with admiration, as if he really wants to create its Christian version. Behring Breivik was fascinated by the Crusaders, and claimed that he was a member of the Knights Templar – the thousand-year-old crusader army. He would like to wish that he had a Christian army that looked like al Qaeda.

If Laden is Muslim Terrorist, Then Breivik is Christian Terrorist

Juergensmeyer suggested If we could name bin Laden as a Muslim terrorist, then Behring Breivik is a Christian terrorist.

He also reminded Americans had the same debate after the terrorist Timothy McVeigh bombed Oklahoma City in 1995. Both then and in retrospect, many Christians refused to see him as a Christian but the similarities between Behring Breivik and McVeight is striking.

He concluded his article suggesting the horrible events of July 22 by Norway's Christian terrorist Anders Breivik were symbolic attempts at empowerment, aimed at showing the world that the imagined war to save Christendom as a result of tragic fantasy — that Christianity is under siege and needs to be saved.