Here is the World’s Most Prosperous Country

Finland, which was on top of the last year’s list, has fallen down to the third place. Denmark followed Norway on the list by jumping two places from last year, while Sweden has fallen from third to sixth place.

Peter Mandelson, a former industry minister in the United Kingdom and former Trade Commissioner of the EU analysed the results of the index to Wall Street Journal. Mandelson wrote that ”history has shown wealth alone does not make for a happy and successful society. Happy citizens are produced as much by democracy, freedom, and entrepreneurial opportunity as they are by a growing economy”.

He also noted that history is filled with evidence of national one-upmanship, not least when it comes to matters of economic performance. 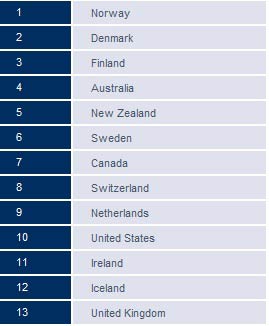 About the Legatum Prosperity Index

The index is prepared by the think tank Legatum Institute. The Legatum Prosperity Index is the world's only global assessment of wealth and wellbeing; unlike other studies that rank countries by actual levels of wealth, life satisfaction or development, the Prosperity Index produces rankings based upon the very foundations of prosperity those factors that will help drive economic growth and produce happy citizens over the long term.