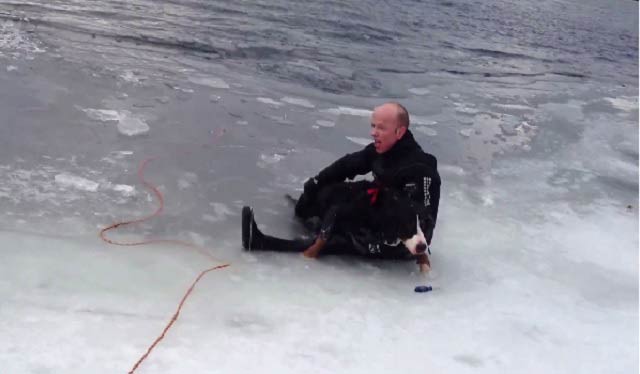 – I was suddenly called by the Daily Mail, among other American and English newspapers, I do not remember what all the newspapers have called on but they were all very interested in my story and wanted to share the incident video I have on my youtube account (see the video above), says Karlsen to Dagbladet.

When the incident occurred, in fact only local newspaper Haugesund newspaper showed media interest for the good deed.

In addition, Karlsen received lots of mail from people who have seen his video, writes Dagbladet.

– Some people say they have cried when they saw the video because they have been so touched, it is very overwhelming. says he.

In the video, Ove Karlsen crawles across thin ice on his stomach in a bid two rescue the animal. He then slid into the freezing water, before grabbing the dog and lifting it back on two dry land.

The dramatic moment was captured on video by Mr Karlsen’s companion and later posted on YouTube.

Stine and Ove Karlsen drove the dog to the vet clinic immediately after the accident and immediately contacted the owners who were eternally grateful for the efforts they had made.