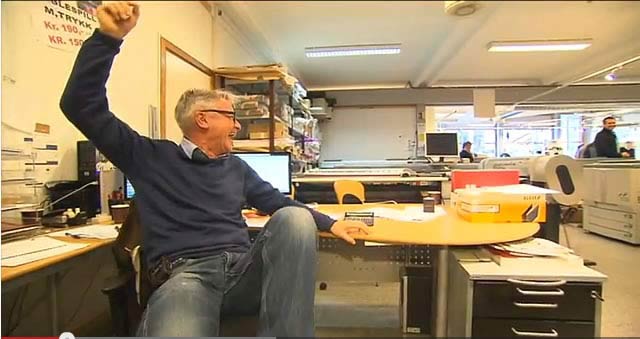 Now the whole office thinks of how to play with Basse Andersen this time: they already slipped a human head instead of parcel, frightened him with unexpected sounds and suddenly threw various objects on the table.

The most easily scared guy, as The Daily Mail called Andersen, last year became the hero of the Internet, when colleagues videotaped the rally with an empty box with his participation. On the video Basse approaches a high box and takes the parcel standing on it. Box turns out to be weightless, and suddenly a human head is appearing. Basse shouts in surprise, jumps and falls back under the laughter of colleagues.

Shot of a terrified courier made during this rag won the title of best photo of the year. The author of this sophisticated joke was even awarded the prize, Basse told to reporters, when they came to look at the phenomenon. “He’s got an expensive camera. And I have got nothing,” – said Andersen.

Although after the interview with the most easily scared guy laid out on YouTube, there is the impression that all of his colleagues do nothing but made fun of him, Andersen still does not feel outcast. According to the records, a minute after the fright and loud calls Basse comes to life and begins laughing at the joke with colleagues.

“I love humor and people who can think up jokes. This means a lot to me,” – said a cheerful Andersen, admitting that he loves his job.

As the report’s author has oberved, Basse’s ability to be scared by every unexpected sound does not exaggerated. While journalists were filming the story, colleagues had to play twice with poor Andersen. First green dragon was suddenly threwn on the table  – that so frightened courier that he fell off his chair onto the floor and started to crawl back in a panic. By the end of report another episode was shown: while Anderson was talking to reporters, someone offscreen loudly clapped his hands, causing a strong reaction by Basse and convince the audience that he deserves the title of the scared guy.

The animated short for Norwegian chips and snacks brand Kims uses the slogan "Why can´t we be friends?". In the film, characters who are...
Read more
Multimedia
00:01:00

The Only Public 2020 Norway National Day Parade in The World...

Due to the outbreak of COVID-19, the government of Norway has announced to suspend all crowded gatherings, including the National Day...