Norway is the 4th Best Country to Do Business

Nordic countries rank at the top of the European countries that are best to do business in.

EuCham score measures the overall business context constituted by corporate environment, legislation, government policies, social climate and conditions which enable or prevent the private sector activities from starting, operating and expanding, both in the short and in the long term.

The ranking originates from the average of the World Bank’s Distance To Frontier score (DTF) and Transparency International’s Corruption Perception Index (CPI).
According to this new ranking, Denmark tops the list with a score of 87, followed by Sweden, Finland, Norway and the United Kingdom.

“Other researches, which do not take into consideration corruption issues, show different results as they only reflect on the capacity of countries’ environments in order to address the corporate sector’s desire to create financial results. The ease of doing business is largely influenced by the effectiveness of regulations and by the time it takes to complete corporate transactions, writes the report. 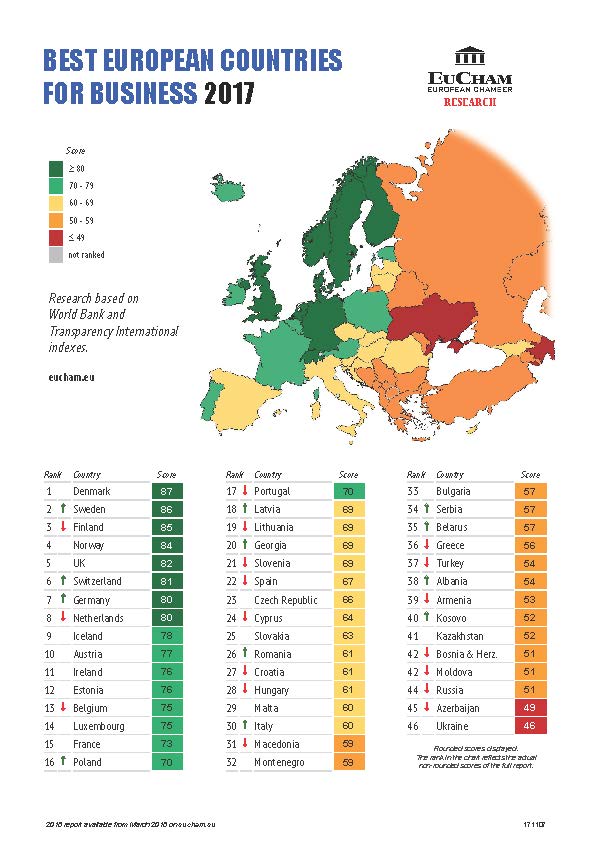 In order to assess European countries based on their business environment, EuCham blends two different scores: the DTF score of the World Bank and the CPI score of Transparency International, since business integrity and transparency play an important role in a country’s’ environment.

The DTF score by the World Bank (from Doing Business report) measures the distance of each country’s economy to the frontier, mirroring the best performance on each indicator across all economies (e.g. starting a business, paying taxes, trading across borders, property registration).

The difference is shown on a scale from 0 (lowest performance) to 100 (frontier); a score of 70 means that the economy is 30 points away from the frontier. The CPI from Transparency International was used to determine how corrupt each country’s public sector is seen to be on a scale from 0 (highly corrupt) to 100 (very clean).

A low score can be a sign of widespread bribery, lack of punishment for corruption, or a government not responding to social needs. The EuCham score, used for the ranking, is the weighted average of the CPI and the DTF scores (50% weight each).

A high score indicates the country is favorable to do business in, while low scores refer to least favorable countries for business.