Kazakhstan celebrates the 25th Anniversary as an independent nation 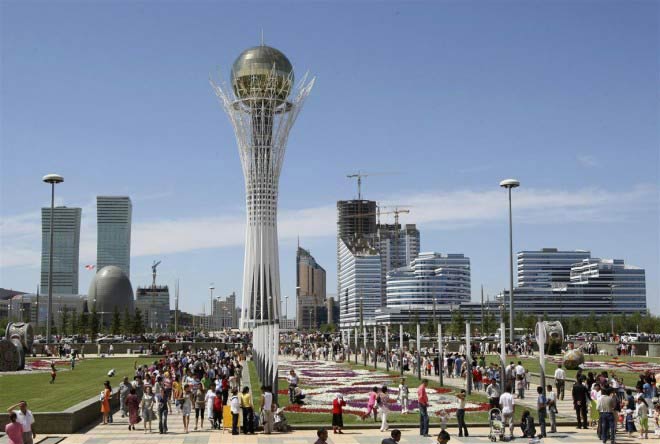 However, the cornerstone of Norway–Kazakhstan relations has always been cooperation in nuclear non-proliferation and security.

Five years after gaining its independence, Kazakhstan signed the Comprehensive-Test-Ban Treaty (CTBT) and ratified it in May of 2002. The CTBT bans any nuclear weapon test explosion above or below ground or any other contained environment. Ratifying the CTBT was a milestone toward creating a safer world. However, as a universally recognized leader in nuclear non-proliferation, Kazakhstan understands that it is time to move from a nuclear test ban to a nuclear-weapons free world. Together with Kazakhstan’s neighbors, the Central Asian Nuclear Weapons Free Zone was established.

In August 2015, the International Atomic Energy Agency (IAEA) and Kazakhstan signed the host country agreement on the establishment of the world’s first Low-Enriched Uranium Bank, in an effort to provide countries with secure access to nuclear fuel, without the need for them to possess enrichment technology.

Kazakhstan is grateful for the partnership of Norway in making the LEU Fuel Bank a reality.  Norway is one of only 5 countries to contribute money for the project. Just as important, Norway lends its considerable moral authority as a voice on the humanitarian consequences of nuclear weapons to the discussions.

Over the years, Kazakhstan has demonstrated its commitment to multilateralism, global peace-building, security and development, as well as its efficiency as an impartial honest broker working for the common benefit.

By the initiative of President Nursultan Nazarbayev the country has launched important international processes including the Conference on Interaction and Confidence-Building Measures in Asia (CICA) and the Congress of Leaders of World and Traditional Religions.

Kazakhstan is a home for more than one hundred different ethnic groups with different religion believes. The population maintained its long tradition of secularism and tolerance. In particular, Muslim, Russion Orthodox, Roman Catholic, and Jewish leaders reported high levels of acceptance in society. Ethnic cultural centers have been established in all regions of Kazakhstan, to support ethnic identity of different nationalities. Their highest forum is the Assembly of peoples of Kazakhstan. Today this powerful social force has become an organic part of the civil society and expresses its views in the chambers of the Parliament, political parties, mass-media, state and non-government organizations. The Assembly of peoples of Kazakhstan has become an important element of the political system of Kazakhstan. It has forged the interests of all the ethnos and ensures the rights and freedoms of all citizens regardless of their ethnic origin and religion. The Pope as well as the former UN General Secretary Koffi Annan cited Kazakhstan as the example of inter-ethnic consent and sustainable development of a multi-ethnic society.

Kazakhstan came to chair the OSCE in 2010 and hold in Astana the long-awaited Summit of the Organization providing a much needed boost to an organization that faced then and continues to face today the daunting tasks of promoting security and cooperation in the vast space from Vancouver to Vladivostok.

In 2011-2012, our country contributed to the development of better understanding between the Islamic world and the rest of the world while chairing the Organization of Islamic Cooperation Foreign Ministers Council.

In this year Kazakhstan was elected the UN Security Council non-permanent member for 2017-2018 years.

Kazakhstan’s membership in the Council will serve as an excellent way of calling the UN members’ attention to the importance of Central Asia for China’s Belt and Road initiative, and the Eurasian Economic Union initiated by Kazakhstan, as well as the potential for constructive international engagement by all the powers.

The sum total of these policies demonstrates Kazakhstan’s commitment and willingness to act in world affairs in ways that champion both regional and international security and stability.

In just over two decades, Kazakhstan has managed to become an economic and geopolitical success story. The country has also illustrated its willingness to be a trustworthy partner in a region that faces many challenges

Kazakhstan is the regional leader in foreign investment per capita, and has a larger GDP than all other Central Asian states combined.

Kazakhstan contributes to international economic security. It is a major grain exporter and has become a development assistance provider.

Kazakhstan, is the first Commonwealth of Independent States country to launch a cap and trade system that will decrease GHG emissions by 15 percent by 2050, equaling 1992 levels.

Giving a credit to the country’s contribution to the green energy development, Kazakhstan was elected by BIE Member States as the host of the International Exhibition 2017 EXPO 2017 being organised under the theme «Future Energy». This, along with the three subthemes – Reducing CO2 Emissions, Living Energy Efficiency, and Energy for All – will allow a presentation of the state of energy today and to showcase sustainable solutions and innovative technologies.

Kazakhstan attaches great importance to further development of fruitful and long-term relations with the Kingdom of Norway in the entire spectrum of bilateral cooperation.

Kazakhstan considers Norway the world’s most successful model of wise and responsible management of natural resources.

The country is very grateful to Norwegian friends for sharing their experiences  – whether it is technical education or energy efficiency.

There is still a lot to learn for Kazakhstan from Norway and the country also believes that there is an enormous potential for Norwegian companies to trade and invest in Kazakhstan.

We should say with confidence that a constructive political dialogue and a high level of the development of our countries create background for further efficient bilateral cooperation in the fields of economy, energy, agriculture and many others.

Honorary Consul of the Republic of Kazakhstan

The Politics of Nobel Peace Prize

Horror på Norsk – Challenge of Being Parent in Norway

Failure of the Nabucco Project and Norwegian Connotations