Israeli ambassador Raphael Schutz has stirred up protests from Norwegian politicians both the right and the left after accusing Norwegians who criticize Israel’s policies of being descendant of Quisling, the Nordic nation’s infamous Nazi ally during WW2.

Reacting to critical comments from Norwegians, Schutz claimed that Norway was part of a “civilization that persecuted Jews for centuries and cooperated with the Nazis” and was today acting accordingly by “declaring the only Jewish safe haven illegal.”

Schutz wrote on Facebook that Norway deserves to be reminded about the “dark pages of its recent history”.

Both the ruling Conservative Party and left-wing rivals, the Socialist Left and the Reds, have reacted to Israeli ambassador’s words in his dispute with critics of the recent incident, where Israeli soldiers opened fire against protesters in the Gaza strip, leaving 17 dead and more than 1,400 wounded.

– The Israeli ambassador’s comment is both misplaced and crosses the line for the acceptable in a professional exchange of opinion,” Michael Tetzschner from the ruling Conservative Party to VG.

Tetzschner also noted that Quisling and his followers were “political outsiders before, during and after the war in Norway”.

– This is how the Israeli ambassador answers when the policy of shooting unarmed youth gets criticized. Anyone who disagrees with his politics is stamped as a terrorist. It is not democratic and it is unacceptable,” Andersen wrote.

Fake News claim from the ambassador

History and Journalism==================Scroll down for Norwegian.Someone once said that an historian is like a…

On the other hand, Schutz blamed Norwegian media for spreading fake news and claimed his words were not correctly reported. He also wrote on Facebook he did not mean all Norwegian:

– I drew a comparison between the number of Norwegians who were actively and entusiasitcally participating, with the Nazis, in hunting Jews (few thousands) and those who were risking their lives in order to save them (few hundreds). Anything facutally wrong with this?, wrote he.

– Maybe you should investigate how much support Quislings party actually had in Norway before making such allegations. The fact that Germany had to physically invade, and was subject to armed resistance throughout the war didn’t tip you off to anything?
It’s not being a “descendant of Quisling” to disagree with you. This attempt at blatant corruption of informed conversation should have consequences for your employment situation. 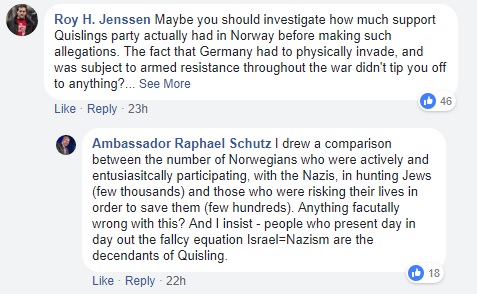