Former Prime Minister of Norway Held Back At US Airport

The former Prime Minister and current President of the Oslo Centre for Peace and Human Rights was travelling to Washington DC to attend a conference when he was held back at the airport due to a stamp in his passport from Iran.

The article continues below the photo. 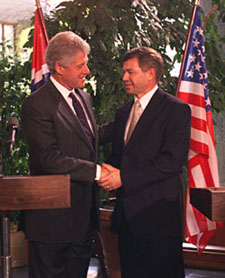 Kjell Magne Bondevik was in Iran in 2014 to attend a conference about violence and extremism, according to VG.

Since 2015, Norwegians and citizens of several other countries who have been in Iran, Iraq, Syria or Sudan after 2011 are required to apply for a visa when travelling to the United States.

Bondevik told VG that he was travelling with a ESTA visa and diplomatic passport, showing that he was once the Prime Minister of Norway. He travelled to the US with the same passport about a year ago without problems.

This time, he was stopped for an hour and questioned about his trip to Iran.

“I explained why I was in Iran. I think that it is strange and provocative that I was detained for an hour. I do not expect special treatment, but expect that the US treats such matters with prudence and flexibility. I can live with this, but it is unfortunate for the United States’ reputation,” he tells VG.

Iran is one of the seven countries affected by controversial travel ban that was implemented last Friday.