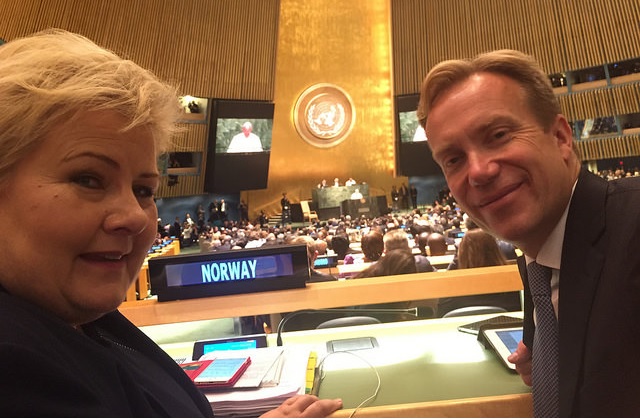 World leaders are meeting in New York for the 71st session of the UN General Assembly, which will open with a week of high-level meetings beginning on 19 September.

Prime Minister Erna Solberg is leading the Norwegian delegation to the 71st General Assembly. This year’s overarching theme is the implementation of the Sustainable Development Goals (SDGs), which world leaders agreed on last year. International engagement is needed in a number of areas to achieve these goals.

Norway will play an active role in efforts to find solutions to challenges such as the refugee and migration crisis, violent extremism, youth unemployment, the spread of infectious diseases, and the negative impacts of climate change. Management of marine resources, promotion of women’s rights and, not least, education are other important issues for Norway.

– Over two billion people are currently living in poverty. The world has no choice but to give priority to providing better education for future generations. Increasing funding for education is the smartest investment we can make if we are to achieve sustainable development worldwide. In order to meet future challenges relating to climate change, conflict, unemployment and migration, we need highly educated societies, Solberg said.

Prime Minister Solberg is co-chair of the group of SDG Advocates. She also proposed the establishment of the International Commission on Financing Global Education Opportunity, which presented a report with recommendations to UN Secretary-General Ban Ki-moon on 18 September.

– The world has seen huge social and economic progress since the UN was founded in 1945. But today’s international situation is also characterised by unpredictability and instability, and in many places human rights are coming under increasing pressure. That is why the international community needs a strong and relevant UN that is able to deal with the common challenges we are facing,  Solberg said.

The members of the Norwegian delegation will take part in a number of meetings and events to discuss what the international community can do to ensure that decades of progress in the areas of democracy, human rights, development and international cooperation are not reversed. Foreign Minister Børge Brende will present recommendations on the future role of the UN.

The high-level week of the 71st session of the UN General Assembly will begin on 19 September with a summit on refugees and migrants, which both Ms Solberg and Ms Listhaug will be participating in. The general debate will begin on 20 September and will last until 29 September.

Norway is the main organiser of four events:

Prime Minister Solberg is hosting a meeting on the role of women in preventing and countering violent extremism.

Prime Minister Solberg is hosting a meeting on sustainable oceans and the blue economy.

Foreign Minister Brende is co-hosting an event on mine clearance in Colombia, together with US Secretary of State John Kerry.

Foreign Minister Brende is chairing theTrygve Lie Symposium, at which Norway will present recommendations to be submitted to the next UN Secretary-General.