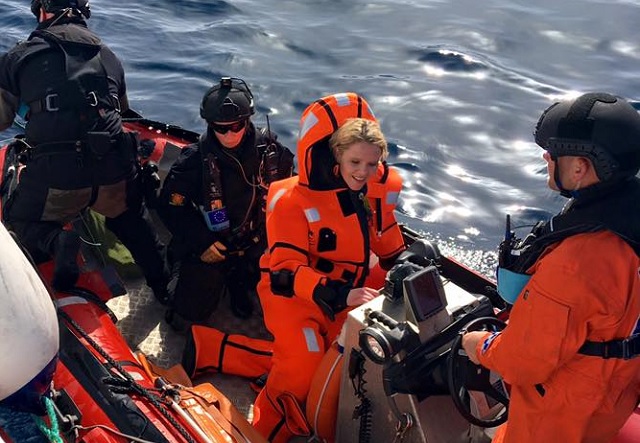 Norway’s first minister for immigration and integration Sylvi Listhaug (FRP), arguably aiming to feel the migrant crisis literally on her skin, went on a cruise to Mediterranean Sea. There she was taken picture of, while gently floating on the surface in a “pumpkin suit”, using John Oliver’s expression. This way, many thought, she attempted to feel what it is to be a refugee, possibly, in order to use this experience in her job as an immigrant minister afterwards.

John Oliver, as everybody else for sure, pointed out that it is quite unusual for a refugee to have a survival suit on, let alone a boat ready to take him aboard any time.

– I think that the most ridiculous part of this stunt is that this looks genuinely pleasant. I would happily spend my next vacation gently floating in the Mediterranean Sea in a giant pumpkin suit, he commented the photo of Listhaug.

The Norwegian government was criticized on its severe policy in the current refugee crisis, especially for deporting nearly 10,000 people from the country. And now it seems that the minister who has overseen this policy is trying to become more compassionate.

However, Listhaug said that her jumping into the water was done not to feel the refugee crisis, but because the crew of the rescue boat Peter Henry von Koss outside Lesbos asked her if she wanted to look at their work and to be “rescued” from the water.

As soon as she was “safe” on board the boat again she told the team: “To see a boat like this when you are drowning, that must be amazing!” And was again mocked by Oliver: “Didn’t you already know that? And that was not even drowning!”

The comedian also called Listhaug “tone deaf” on the issue of immigrant crisis and laughed at her earlier remarks on Jesus on NRK Dagsnytt 18: “Jesus would say that we have to help as many as possible. And that’s not about helping many in Norway”.

– Obviously, she’s living by one of Jesus’ most remembered sayings: “Do unto others as you would have others do unto you. The offer which is not applicable to Norway, a country that does not exist yet”.

Listhaug were also ridiculed online after floating in the Mediterranean

The criticism against Listhaug is not limited to Oliver. The images and footage of the stunt sparked uproar also on social media.

Listhaug is Norway’s first immigration minister since the department was founded in December 2015.

So perhaps I should skip lunch today to feel what famine is like (?) https://t.co/2Rw7xPN26Y #listhaug

Dear @Regjeringen, would you please ask Mrs. #Listhaug if she feels comfortable in the warm ebrace of these people? https://t.co/wAJqYUM6Xb