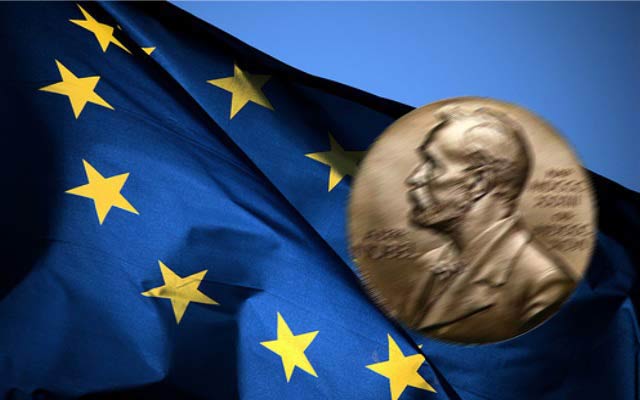 Leader of the political movement Nei til EU (NO to EU), Heming Olaussen thinks it’s completely absurd to give the Peace Prize to EU.
– This is a propaganda, and there must be a discussion on the Nobel Committee for “this victory”, says Olaussen to NRK.

He is also critical of how the EU approaches to poor countries. He believes that people in Africa or Latin America will have different reactions than the ones in Brussels for this prize, because the EU is a trading bloc contributing to maintain many countries’ poverty.

– The EU will continue to allow and encourage a nuclear-based defense in the UK and France, and are firmly committed to their own nuclear research program. EU’s handling of the euro crisis also leads to unemployment, social deprivation and undermines the welfare states of the European Union. This is not stabilizing and peace-building, says the chairman of NEI til EU.

Coalition member Scialist Left Party (SV) leader Audun Lysbakken aggrees with Olaussen. He believes there is nothing to suggest that the EU deserves this award now.
– This is an unnecessary politicization of the Nobel Peace Prize in domestic political terms. I think this will look odd in the world, says SV leader.

– I think people in southern Italy and other similar countries who experience uncertainty and anxiety related to Euro will question the timing of the prize, says Eriksen.

On the other hand, Conservative Party (Høyre) chairman Jan Tore Sanner believes the EU has been a worthy candidate for decades and really deserved the prize. Sanner also suggested that, cooperation within Europe has contributed to peace and development in Europe ever since the European Coal and Steel Community.