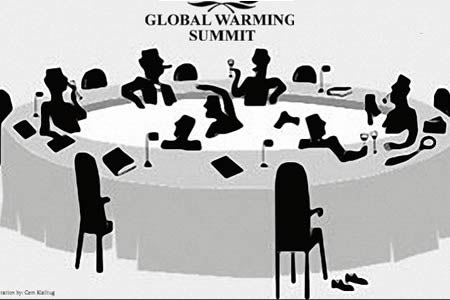 In this spring, the Norwegian parliament is expected to make decisions on significant cuts in Norwegian climate gas emissions by 2020. But Bonde expects another delay, as 14 years’ experience of follow-up to the Kyoto Agreement suggests.
Even though the interest in climate policy is on rise in Norway, the conservative politician suggests that the frictions about climate policies in the government are too strong to avoid a probable government crisis in a few months.
He remembers how the Socialist Left Party (SV), which is one of the two junior parties in the government and the leading climate policy advocator, had a bad local election in the Autumn. Subsequent opinion polls forecast the party’s fall below the threshold of four per cent at the general election in two years’ time. He argues this would lead to the red-green bloc losing its majority in the parliament, and the environmental commitment will lose ground accordingly.
Bonde also warns Norway may lose credibility in the international fight for climate measures as long as the commitment to decrease emissions is delayed again.
Comments
Facebook
Twitter