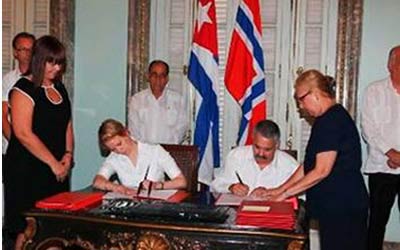 During the official talks previously held in the Cuban Foreign Ministry, Norwegian State Secretary Ingrid Fiskaa and Cuban Deputy Minister of Foreign Affairs, Dagoberto Rodríguez Barrera, review the issues of bilateral interest and renew the willingness to continue strengthening the relations between both nations.