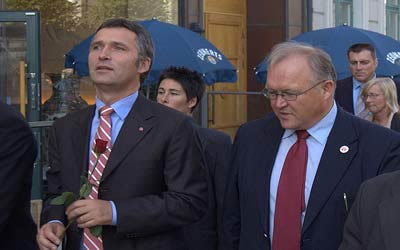 During an interview with Norwegian daily, Dagens Næringsliv, Erna Solberg said that government spends too much of oil revenues instead of lifting growth in the Norwegian economy. As a response to Solberg's statements, The Prime Minister suggested that Høyre leader still does not understand the Norwegian model. – What makes the model unique is investing in people, social justice. It gives us great growth potential. That's what brings us higher growth, higher productivity growth and more employees than European average, " told Stoltenberg.

Stoltenberg also said Solberg represents an old-fashioned and narrow right-thinking of economic growth and it is based on a mistaken understanding of what promotes growth. The Prime Minister concluded his remarks by stating that Norwegian model is about creating and sharing, which also helps to create economic growth.