This past weekend, President Alexander Lukashenko was re-elected for his fourth term as President of Belarus, a position which he has held since 1994. While the Belarusian governnment portrayed this as yet another “landslide victory” for Lukashenko, KGB and riot police were simultaneously arresting several hundred men and women who were protesting in Independence Square in Minsk on 19 December.

Of those arrested were Natalya Koliada and Artsiom Zheleznyak. They are the Co-Director and Manager, respectively, of Belarus Free Theater, which over the past 5 years has promoted democracy and freedom of expression through its independent theatrical activity in a country that is frequently called “Europe´s last dictatorship.”

The whereabouts of all three are unknown

“While we´re buying Christmas presents here in Norway, our European neighbors in Belarus are being stripped of their basic freedoms, ” says Brendan McCall, Founder and Artistic Director of Ensemble Free Theater Norway in Oslo.

McCall has worked with Belarus Free Theater before, most recently when Ensemble Free Theater Norway helped them on their September performance of Discover Love at Det Norske Teatret in Oslo. At the time, Khalezin stated that he was getting death threats by email and on the phone.

“How bitterly ironic” says McCall without humor, “that their play (Discover Love) deals with human rights activists who have disappeared, and no one knows where they are.”

“This is not a situation limited to just Belarus,” continues McCall. “It affects all of us–as human beings, as theater-workers. Anyone who values freedom of expression.”

In the past 18 hours, McCall has circulated a petition to members of the international theater community, pressuring Lukashenko and the Belarusian government for the release of members of Belarus Free Theater. This will be sent to various Norwegian cultural leaders today.

In addition, McCall has been in contact with the Norwegian Helsinki Committee, who are also hoping to facilitate a swift and safe release for not only the Belarus Free Theater members, but everyone who has been wrongfully imprisoned this weekend.

“The support for Belarus, and for Natasha and Kolya, has been swift and inspiring” McCall says. “We´ve over 200 people sign from cities and countries on over 4 continents–actors, directors, playwrights, teachers.”

“But I´ll feel a lot better once I get a message from them directly,” McCall says. 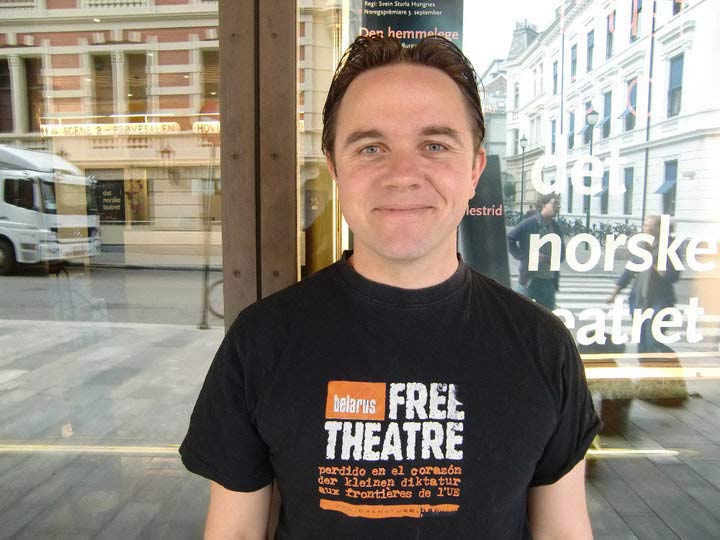 To sign the petition, please email [email protected] to have you name added.

Brendan McCall is an American theater artist who has lived in Oslo since 2008. He is the Founder and Artistic Director of Ensemble Free Theater Norway, and was Rektor of The International Theatre Academy Norway from 2008-10.

The violent scenes in Washington DC are met with strong reactions from Norwegian politicians. Four people have died, including...
Read more
Politics

With a picture of a Nobel Prize medal, Donald Trump advertises his “achievements in peace” work. But the president, who has not...
Read more
Politics

Freedom of expression, cultural rights and cultural and natural heritage are under pressure in many parts of the world. In response, Norway...
Read more
Politics

‘The new EU sanctions regime will be an important tool for targeting individuals responsible for or involved in serious human rights violations...
Read more
Politics

‘Norway welcomes the renewed pledge for cooperation based on the signed Israeli-Palestinian bilateral agreements. I hope this will pave the way for...
Read more
- Advertisment -
Advertisement