A Project That Puts Lives Back on Track 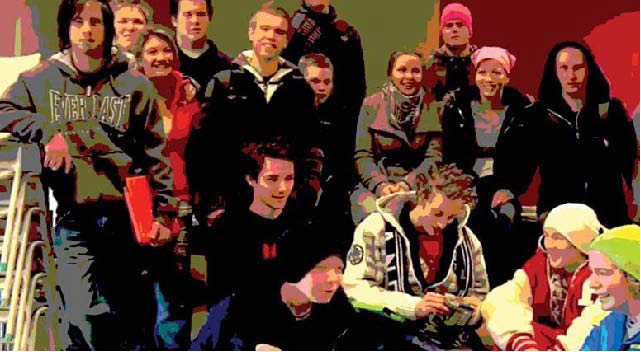 In Norway, like many other parts of the world, some teenagers choose to drop out of high school simply because they feel it is too much for them. When they drop out, they usually use their time in what most of them call “real life” such us smoking, heavy drinking, wild parties, and drugs.  Parents are especially worried in this case. They are afraid that their children won`t have a bright future if they keep it this way.

– “My son quit school when he was only seventeen, and now he is hardly ever at home. I am worried that he is going to start selling drugs and that won’t lead him anywhere” says Karina Petersen

This is something that has been going on for a very long time. Eddi Eidsvåg is one of those who noticed it and wanted to do something about it. In 1997 he started Pøbelprojekt in Sandness. And together with nineteen other people, they run this project. One of their determinations is to help all the young people in Norway whose future is at stake.

The name has caused mixed reactions

Pøbel means rabble or a disorganized person. It is because of this definition that the project have had heavy criticism from many people, especially from experts in language and  in drug abuse. They believe the name has negative associations, and leads to stigmatization of young people who are struggling. Some also say that it may be hard for the parents to tell others that their children are members of the pøbel, as it may sound embarrassing.

But to the leaders of this project  however, they use  the term pøbel  to mean that we are all people. “We are all born disorganized . Then we are organized  by the environment and by what is expected of us as good citizens.

They are just innocent victims

The ones who are called “ Pøbler” are the young ones who have dropped out of school, or  who are thinking about quitting school or who are just tired of school and  don’t have any motivation to keep up anymore.

Pøbelprosjekt believes that these young people don’t know the danger in it. The danger however is that these youngstars are on their way to miserable lives, disappointments and problems that they are going to suffer for a long time.

True, school can seem hard at times. When one thinks about homework and having to revise note books every day for many years. But Pøbelprojekt assures that school shouldn’t be a problem.

No pause until the goal is reached

When most young people fail at school, they are called losers. Something that may turn them down and make them feel like they have nothing left to do. But Pøbel project makes them realize that they have more than they can imagine. It teaches them to use their resources properly in order to achieve their goals. Many don’t know their rights and what opportunities they have. With pøbelprojekt, they learn all of this.  Many of the young people who are or were members of this project have now a meaningful and descent life.