Every nation has a national day but probably very few of them are so enthusiastically and uniquely celebrated like May 17th.

The unique tradition of the celebration of the 17th of May brings some complexities. That is the reason why it is often confusing and hard to understand for a new comer to Norway with all that is going on during this day. The local children carry flags and march together with bands. Ice cream, hot dogs and other goods to eat are abundant. The buildings are decorated with Norwegian flags and women and men of all ages dress in their Bunad, or national costume. Graduating high school students wear uniforms and celebrate the approaching school year’s end. The sound of loud music is heard from every corner. Understanding of all these 17th of May traditions requires some historical and social background knowledge.

The 17th of May was established as a National Day in 1814 as the Constitution of Norway was signed in Eidsvoll, declaring Norway as an independent nation. However, Norway was under Swedish rule at that time and the Swedes believed that the celebration was a provocation against Sweden and the royal family. After several attempted celebrations, King Carl Johan forbade celebrating the day. This prohibition triggered a higher level of ambition towards Norwegian independence and consequently an enthusiastic crowd gathered to protest at the main square of Christiana (Oslo), which later became known as the Battle of the Square of 1829. The Swedish authorities reacted to this spontaneous public meeting but their actions only increased the resistance. Henrik Wergeland had a key role in this resistance movement and in the following years helped to transform the day into a celebration for the children rather than a day of patriotic pride. After King Carl Johan died in 1844 his son, Oscar I, took over his position and the day started to be celebrated freely.

During the 1860’s, 17th of May became more established and the first barnetog (children’s parade) was launched in Christiania (Oslo) in 1870, in a parade consisting of only boys. It was only until 1899 when girls were allowed to join in the parade for the first time.

Originally the day focused only on the Norwegian constitution but after 1905, the focus had been directed also towards the royal family. Moreover, During the Second World War, the day was not publically celebrated due to German occupation.

Children have a special role in the celebrations. The biggest part of the event is dedicated to them. The children’s parades consist of marching, waving home-made Norwegian flags and carrying school banners. Parades can also vary in size from a few dozen people in the villages to several tens of thousands of participants in Oslo. Children in Oslo pass the Royal Palace, where royal family members wave back from the balcony.

The same applies to certain students ranging from kindergarten to high school, often including “Russ students”. Other participating bands, municipality representatives and other social groups can march as well.

Photo: Wikimedia Russ passing by the Royal Palace in Oslo, May 17th.

Another significant tradition regarding 17th of May is the appearance of Russ students. Based on a Danish student tradition and celebrated in Norway since 1905, the Russ celebration involves the graduating class of high school.

Each year, around 40, 000 graduating high school students called “Russ” can be recognized with their Russ hats and uniforms. The traditional Russ celebration starts in spring and ends on the 17th of May, a day with much celebration for Russ students. However, many are exhausted after celebrating for days prior to 17th of May (especially the night before) and, thus, are more “passive” during the national day. Nevertheless, the day is marked by Russ parties, Russ buses, Russ newspapers and Russ Cards.

The color of the uniform should match the graduate’s line of study: Red for the students that are geared towards higher education (this is the most common color), blue for those going into business (also higher education in economics and management), white for medical and social studies, black for engineering (such as mechanics or electrics) and green for agricultural fields.

Russ cards (russekort) are mock business cards that the Russ students (graduating student) hand out to anyone that asks for them. It contains a picture, contact details, and a slogan. Usually the picture is a funny picture or a drawing of the Russ, a picture of a celebrity, or just a funny picture in general. The names and contact details are often spoofs and the slogans are often jokes.

Russ students exchange such cards for fun and often commemorate those who have a large collection of other Russ cards as it is a status marker and a sign of popularity. This tradition also involves children who collect and barter them. However, this sometimes leads parents to be concerned over the inappropriate content sometimes found on Russ cards. As a consequence, many Russ students carry two sets of cards: one designed for kids and one designed for adults or other Russ students.

According to the tradition, each Russ wears a uniform during the entire russefeiring (Russ celebration period). There are several traditional songs that are sung and played by Norwegian orchestras and marching bands during the 17th of May. “Yes, We Love this Country”, “Norway in Red, White and Blue”, “The Song of the King ” and “Seventeenth of May I’m so Glad” are the most favorite songs and melodies commonly heard.

Food on the National Day

May 17th is usually associated with hot dog, soda and ice-cream. Since there is a custom of “eat what you like” on this day, junk food is commonly on the menu, and in large quantities. What is traditionally eaten at family tables, however, often depends on where people are living. For example, near the sea and rivers, eating salmon and trout is quite common. While in the mountain villages, it can be rømmegrøt og spekkemat (porridge and cured meat).

Bunad: More than a Traditional Dress Photo : Sigmund Commons Two young women in national costumes from Trøndelag, photographed in Trondheim on the constitution day of Norway.

Bunad is an umbrella term encompassing, in its broadest sense, a range of both traditional rural garments (mostly dating to the 19th and 18th centuries) as well as modern 20th century folk costumes. In its narrow sense the word Bunad only refers to garments constructed in the early 20th century and only loosely based on tradition. The word Bunad itself is a 20th century invention.

The Bunad movement has its roots in 19th century national romanticism, which included an interest for traditional folk garments not only in Norway, but also in neighboring countries such as Denmark and in other countries, most notably Germany. However, in Norway national romanticist ideas have had a more lasting impact, as seen in the use of folk inspired costumes.

In Norway, it is common to wear a bunad at various celebrations such as folk dances, weddings and especially during the May 17th National Day celebrations. In recent years, its use has reached far outside folk dancing, folk music, and particular holidays. Now accepted as proper gala attire, it is increasingly common to see people, especially women, dressed in a bunad for other formal occasions. For instance, the former Norwegian foreign minister, Thorvald Stoltenberg, made history by presenting his accreditation as ambassador to Margrethe II of Denmark dressed in a bunad.

May 17th outside of Norway

Many Norwegians living abroad and those who have Norwegian roots also share this enthusiasm for the mother land. Particularly Norwegian embassies, churches, student organizations and other Norwegian institutions abroad organize local celebrations in different cities.

In Stockholm, Sweden, 17th of May celebrations have turned into a tradition for several years now, where over ten thousand Norwegians and Swedes come and celebrate together. There are also 17th of May programs in other Swedish cities including Gothenburg, Luleå and Lund.

Norwegian-Americans also celebrate the day with Viking helmets, cowboy hats, Norwegian flags, sweaters and homemade costumes in the area of Bay Ridge in Brooklyn, New York on the closest Sunday to the 17th of May. Similarly Seattle, WA has hosted celebrations every year since 1889 and other large celebrations are held in London, Singapore, Florida and Canada. 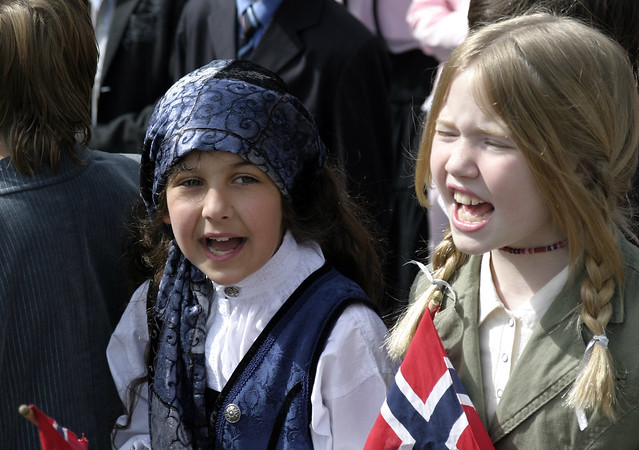 Despite all the enthusiasm during the celebrations, 17th of May has not always been a conflict-free day. On several occasions, certain immigrant groups wanted to carry their original countries’ flags along with the Norwegian flag but they were encountered with a fierce opposition and a ban on the public display of non-Norwegian flags. Facing this opposition, some municipalities abolished the ban based on the demand of certain immigrant groups. Similarly, it was only until 2007 and after heavy debate that the Sámi Flag, which represents the Sámi people who are nationally recognized as indigenous to Norway, was allowed to be displayed in Oslo during 17th of May.

Another significant conflict regarding 17th of May occurred in 1983. A Sagene School in Oslo, in an area known to have many children with immigrant background, received a bomb threat from ultra-nationalists of Oslo. The threat came from Neo-Nazi circles as they thought the children parade was too colorful. This event later triggered a social movement called “17th of May for all”. This movement was a reaction and protest against those who wanted to abuse the national day by enforcing a national pride with racist ideologies. Hundreds of volunteers and artists have been keeping this tradition alive for the past 25 years.