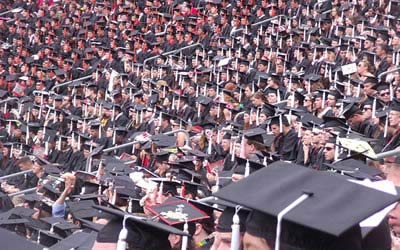 In most of these arguments, it is proposed that an increase
in the number of students and encouraging them to pursue higher education will
take people away from vocational education. This is a fallacy. Everyone
understands that it is both possible – and highly desirable – that we need more
people with vocational training and higher education simultaneously. This is
the main argument and the basis of St.mld. 44 (2009-2010) Education line –
which Parliament adopted last year.

We need higher
expertise in workforce

First, we need more people with higher education. Teaching,
nursing care and engineering are the prioritized fields. Both in Norway and
internationally all the research shows that the need for highly educated
workers is increasing and that we will not be able to sustain the growth and
development if we fail to ensure that more people are pursuing education. It’s
pretty obvious that the recent years’ progress has been possible through a
substantial strengthening of highly skilled labor, and future development will
also be dependent on this expertise.

Human labor is replaced by computers and advanced equipments,
and they require higher and higher expertise to operate. Therefore, our
universities and colleges constantly develop more advanced and more relevant
courses in which an increasing number of future employees receive education.

Second, we do need more people with vocational education.
There is already a labor shortage in several types of vocational training, and The
Norwegian Statistics Bureau’s projections show that the defect may be greater
in future years if more people don’t choose to take vocational training. This
particularly includes electricians, mechanics and a number of building and
construction areas, not to mention the health and social care.

The most vulnerable
group in the labor market

There is no doubt that those who do not complete secondary
education are vulnerable in the labor market. Their connection to the market is
often random and they are often the first ones to be cut in difficult times.
They have much lower employment than those who have a craft or journeyman’s
certificate and higher education.

In addition, statistics show that employers are investing
significantly in workers with more formal education. People with no education
beyond primary and secondary education are over-represented among the
unemployed, and disability pensioners. It is obviously not the case that the unskilled
necessarily fall out of the labor market and social life; on the contrary, many
people are doing very well, have good, stable jobs and achieve a lot of high
competence through participation in the labor market. But there is little doubt
that the competition for unskilled jobs is tough, and this group is more
vulnerable.

About 70 percent of young people complete upper secondary
education five years after they finish 10th grade. The rest either interrupt
their training, or are still in secondary education. That is why the minister
has initiated an extensive and complex effort to raise the completion of their
education.

Statistical projections show that the proportion of
employees with no education beyond primary school will be reduced by 50 percent
(from 27 percent in 2007 to 18 percent in 2030) until 2030. Also the number of
people who have completed programs for business and office skills at high
school without further higher education will be increased significantly, while
the need for workers with vocational education and higher education (all
levels) will continue to increase accordingly.

This is a trend that will affect other countries, too. The
EU project New Skills for New Jobs
also shows that unskilled worker jobs disappear, and newly created jobs require
mostly technical or vocational higher education. There will still be a need for
some unskilled labor for many jobs, and compensation will be needed for the
retiring people. But the proportion of employees without formal education in
sum will fall quite noticeably.

It is important that those who speak about the educational
needs should take these realities into consideration. Fortunately, we are
having a wave of young people nowadays. The number of children in baby boomers
will grow quite significantly in future years. The number of young people aged
19-29 years will grow by over 90 000 people between 2008 and 2015, and the
increase is about 115 000 in 2020. In addition, a young population continues to
immigrate to Norway.

Norway has fared remarkably well through the financial
crisis; labor migration is today relatively high. In the youth wave, there is a
significant potential to increase both the number of young people who take and
complete the vocational education and the number who are in higher education.

The government has, fortunately, realized this and has
ambitious plans to increase the number of apprenticeship and higher education,
including vocational training. It is important both for individuals and for our
economy that we provide a good training and education, and it requires more
study and more formal training beyond basic education.